Video: Former Radio Host Talks About Growing Up as a Heroin Kingpin's son

Reggie ("Reg") Davis, a longtime Detroit radio personality and former Wayne County Commissioner, talks about the good life he led growing up as the son of a heroin kingpin in the 1970s and 1980s.

"My father was labeled one of the top 10 heroin dealers in North America back in the 70s and 80s and he provided a great life for myself ... my sister, my mother, his siblings -- there were 10 of them, five boys, five girls," he tells Alan Bradley, aka "Al Profit," a filmmaker who has a YouTube channel specializing in crime stories. (The video, viewed 8,000 times since last week, is below.) 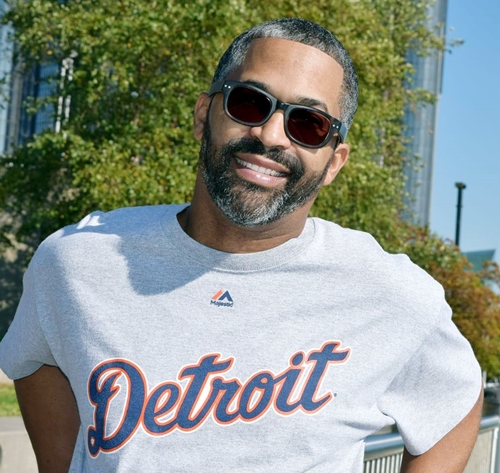 Reggie Davis: "He provided a great life for myself ... my sister, my my mother, his siblings." (Photo: Facbeook)

"I believe every month in the '70s, we all had houses, condos, apartments out in California and he would pay all of the bills. And I think it was something like, in the 70s now, it was like $40,000 a month or something like that, which is the overhead just to pay for everybody's bills, car notes, everything.

"He bought his mother a $5-million mansion in Beverly Hills from a white actress. A beautiful mansion. ... We'd go over to my grandmother's house and go swimming and go in the back and pick cherries."

"We had a limosine driver named John, a bald-headed white man with Malcom X glasses. He had a white limosine ... that he'd drive us to school every morning."

He tells Deadline Detroit he moved from Detroit to California when he was around seven and returned home with his mother and sister a couple years later. His father, Reginald Davis Sr., stayed in California at the time and eventually did prison time for heading a drug organization known as DFG (Davis Family Gang).

"That was his life," he said. "I thank God to this day that I had a dream at age 7 which put me in front of a microphone uplifting people, effecting positive change in Detroit. And that became a quest for me to make a career out of."

He worked for radio stations around the country and eventually in Detroit, including WGPR, WJLB and WCHB. That, he says, kept him on the "straight and narrow." He said WJLB/Detroit Urban Heritage "represented the peak of my career in Detroit."

He tells Deadline Detroit that his father now lives in Detroit and has co-owned restaurants and bars over the past 15 years. As a kid, he says, he had no idea what his father did for a living.

Davis is the founder and president of CeaseFire Youth Initiative Inc. His brother was killed at 19 in Detroit by gunfire. Davis says he's running for state representative and is working on a book, "Blessed by the Mic."