Things got ugly last weekend at a division semifinal football game between Denby High of Detroit and Almont High.

"During the national anthem, he overheard them saying: 'Look at these N-words taking a knee and they don't even know why they're doing it,' and they kept going."

Godfrey also alleges that Almont parents harassed and intimidated the Detroit east-siders during the game.

"Grown men and women started spitting on our kids as they walked up the ramp. They were throwing food, cups and whatever. They called my student trainer a little monkey and they were saying: 'Who let them off their leashes?'" Godfrey said. "'They need to be on a leash. They never should have been here in the first place.'" 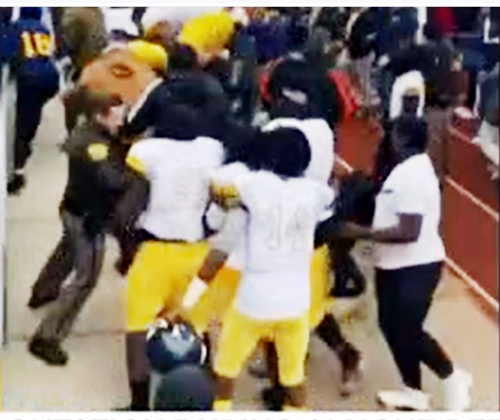 A Denby guidance counselor, Andrea Duso, posts on Facebook that she heard a man say: "Put them back on their leashes."

Saturday's game was at Walled Lake High School in Commerce Township, where Almont won 36-8. Referees ended the game early during the fourth quarter due to excessive fouls.

In a since-deleted tweet, Almont band member Trevor Forsythe alleges that a Denby player shoved him while the band was chanting at the end of the game. After this happened, Almont fans began yelling racial slurs at Detroit players, who in turn threw helmets and shoes at the crowd, the Free Press reports.

Two Oakland County deputies tried to keep Detroit players from rushing into the stands at the end of the game, but no arrests were made. 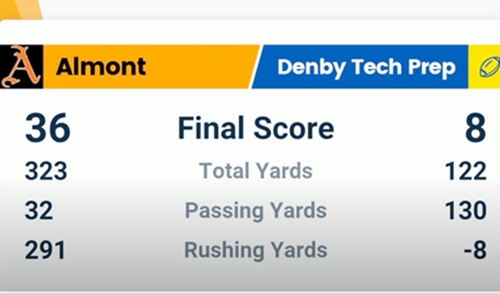 In a seven-paragraph letter to parents and students Monday, Almont Supt. William Kalmar blames the clash on "a handful of spectators.” Excerpts:

"We are investigating fully allegations that members of the Almont Raiders marching band taunted players from Denby High School while both groups attempted to exit the stadium after the game was called by the officials. If we find evidence indicating that there was any taunting, those students involved will be disciplined appropriately.

"At this time, we have no evidence of such behavior by members of our marching band, dance team, cheerleaders or student body. There is no evidence of misconduct by our football team, football coaches or staff."

DPSCD will be submitting a clear account of what occurred at the Almont game to the MHSAA and a set of demands to address concerns. One concern will include the use of a racial epithet “you people” to our coach from the lead referee.

In a statement quoted by the Free Press, Vitti also says:

"The school district is deeply disturbed by the actions witnessed this weekend during the Almont-Denby game.

"Based upon preliminary findings, ‎it is our understanding that Almont adult spectators were cursing and spitting on our coaches and players after the game while leaving the field. The disrespect toward the city, school, and players continued on social media after the game where Almont fans used numerous racist stereotypes.

"We look forward to getting to the bottom of what occurred based on factual evidence to determine the district's next steps on how to best support our school and its administration, coaches, and students. . . .

"We are . . . attempting to identify those spectators who may have aggravated the confrontation by taunting the Denby players. . . . Those who cannot maintain the appropriate level of dignity and decorum at our events are not welcome to attend."

Edwin C. Denby High, open since 1930, is on Kelly Road near Hayes Street on Detroit's east side .