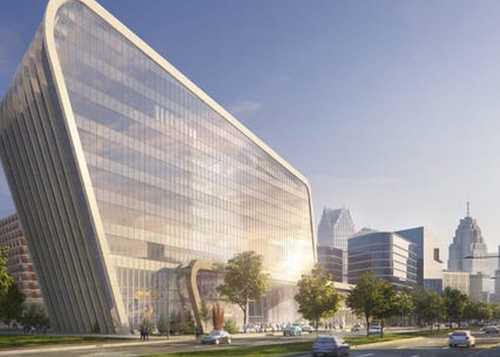 UM innovation center planned for the fail-jail site on Gratiot.

The authors, University of Michigan faculty, run the Semester in Detroit program, where students foster "reciprocal relationships" with the city's people, organizations and neighborhoods.

On Oct. 30 in downtown Detroit, UM President Mark Schlissel joined Detroit Mayor Mike Duggan and billionaire developers Dan Gilbert and Stephen Ross to announce a partnership for a project estimated to cost up to $750 million.

Their plan is to establish a "Detroit Center for Innovation" on the now infamous “failed-jail site” to train the next generation of college graduates. UM would offer masters degrees and “stackable certificates” for professionals who would serve the emerging high-tech economic system, building capacities in areas such as artificial intelligence and cyber-security, emerging fields in what some have called the rise of “surveillance capitalism.”

Semester in Detroit is making this public statement because we feel it is important for our community partners, colleagues, alumni, current and future students, and donors to know where we stand. We present below a series of questions that we hope will be discussed widely and openly as more people interrogate this proposal and contemplate what this announcement signifies for the university’s priorities and its many long-term relationships in Detroit.

The city of Detroit is important -- both historically and contemporarily -- for understanding the complex and inextricable conflicts created by capitalism’s dependency on racial and economic oppression and inequity.

While such conflicts have been present since colonization of the original Anishinaabe lands that became “Detroit,” we need only look back a few years, or even weeks, to see how white billionaires continue to “reimagine” majority-black Detroit in their own image and for their own economic benefit. Given this history, and considering the private interests involved in this partnership, we believe the “Detroit Center for Innovation” is an inappropriate and irresponsible deployment of the university’s social, economic and intellectual capital.

We have four questions that we hope will generate a much-needed and broadly participatory public conversation about this proposal:

These questions reflect the type of critical thinking and analysis we promote among students and the broader Detroit communities of which we are a part in the Semester in Detroit program.

We do not ask these questions in an academic vacuum. Rather, we have always tried to hold ourselves and our institution accountable to our underlying commitment to social justice for the people and communities of Detroit. It is in this spirit that we publicly ask our own institution to seriously engage in these critically important questions.

For more information about the authors' response to the “Detroit Center for Innovation,” you can email faculty director Stephen Ward at smward@umich.edu.