LeDuff: A surprise ending to the story of Harold and Annie

Most every year, around the holidays, I write a little story about Annie, the ancient east-side recluse and Harold, the retired firefighter, and their odd and bitter love story.

Harold looked after Annie while Annie wasted away in bed in a windowless house surrounded by filth and bric-a-brac. Every time I visited, Annie would berate Harold about this or that.

And I would wonder when and by what happenstance the 90-year old hermit would pass on.

This year -- I am happy to report – Annie is no longer with us. 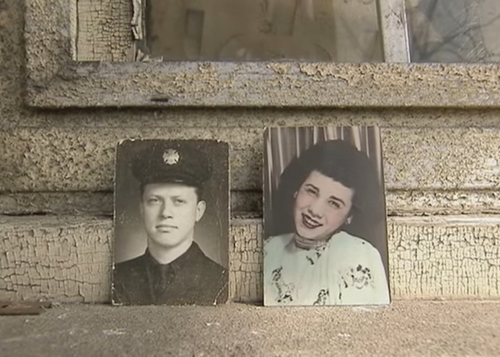 Harold and Annie, in their long-gone youth. (File photo)

She has moved to Arizona and reportedly lives in a nice home for old folks, where her laundry is done, her toenails are clipped and the food is hot and tasty.

This is all very well and fine. But the circumstances of her departure left Harold with the taste of spoiled milk.

“She never told me she was leaving,” Harold says. “She never said thank you. Not kiss my ass. No nothing.”

In her rush to beat it out of town, Annie left behind her rotting house and the furnace well-wishers bought her after reading about her predicament. Annie also leaves behind her seven cats and the ashes of her dead husband, spilling from a cardboard box.

And dear reader, it appears all the while, Annie was a very wealthy woman.

Her departure was set in motion after she was picked up by police on a cold April night. She was spotted by patrolmen around 2 a.m. wandering down Gratiot in thin clothes and thin shoes.

The police took her to the psychiatric ward, and then called Harold, knowing from the stories that Harold was the decent neighbor who would check up on Annie. After all, the two had been neighbors for 50 years, from the height of Detroit to its fall, from youth to old age.

After some detective work, Harold and his wife contacted Annie's sister who lives in Arizona. Harold was able to track the sister down after looking for clues in Annie's mail – with Annie's permission – which included Annie's financial papers. Those papers revealed that Annie was worth in excess of $1 million.

A few months later, the relatives arrived and without a word to Harold, ferried Annie off to Arizona.

“I never liked her,” says Harold of Annie. “She was ornery. I was just trying to do the right thing. Even after I knew she had money I still brought donuts and she'd bitch they were the wrong kind. No good deed I guess.”

I placed a call to Annie's sister in suburban Phoenix. It was not a pleasant one. The sister confirms that Annie is now living in the desert and is well taken care of. But no gesture of gratitude was offered to either Harold or the community for the time and care and expense that was put into the well-being of Annie, who often went without socks. No apology was given for leaving behind the decrepit three-story house that looks as though it’s frozen in mid-collapse.

Abandoned pets and an urn

And now it is left to Harold to come by twice a week to feed the abandoned cats.

Then there is the matter of the husband's ashes.

“I didn't like the guy,” says Harold of Annie's third husband, whose cremains were left in the attic among photographs and yellow newspaper clippings. “But I couldn't just flush him down the toilet. That would be wrong. I do have some morals you know.”

The dead husband liked to sail and so Harold is planning a burial at sea.

Moral to the story? There is none. “I didn't get nothing but a lot of fucking headaches,” says Harold.