Ruby Gilchrist and her dad, Michigan's lieutenant governor, charm at a second event

Yes, we know -- lots of working parents do this all the time. Still, Garlin Gilchrist II is our first six-foot-eight lieutenant governor and the first to make public appearances with an infant in his arms or lap.

For the second time in less than a week, the lanky Democrat combined parenting with his other duty -- caring for Ruby Madeline Gilchrist, born in mid-June. They showed up Tuesday at River Rouge High School for a Thanksgiving All-Star Give Back event, with the baby on her father's chest in a carrier. 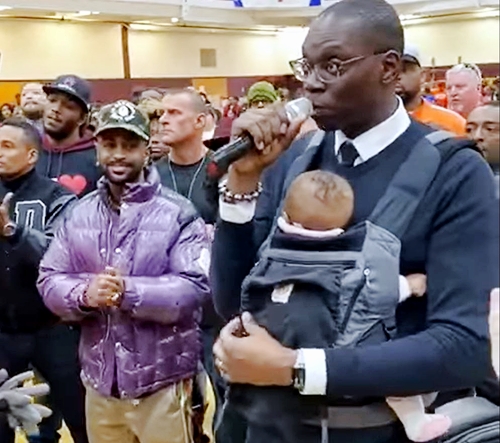 Gilchrist joined other VIPs -- rappers Big Sean and Sada, actor Hill Harper, ex-boxer Tommy Hearns and former NBA players Derrick Coleman and Gary Payton -- who helped hand out turkeys, canned goods and holiday meal trimmings to more than 5,000 families in need. The distribution was organized by a 12-year-old Detroit nonprofit, the Tarence Wheeler Foundation, created by a native of the city who was an all-state basketball player and played for Arizona State Uniuversity.

"Giving back is a family affair because we are all family," the lieutenant governor posts with a 44-second Facebook video.

Sen. Mallory McMorrow, D-Royal Oak, tweets that she "can't wait to see [Gilchrist] presiding over the state Senate like this."

Six days earlier, he brought his youngest child to a union event at the NAACP Detroit Branch office on Second Avenue in the Cass Corridor. Gilchrist, a 37-year-old native Detroiter, and his wife Ellen also have 5-year-old twins Garlin III and Emily Grace.

Our coverage of the Nov. 20 sighting brought this reaction from U.S. Rep. Rashida Tlaib of Detroit: "Our Lt Governor is more awesome than yours. Lt. Gov. Gilchrist is real, and watching him as a father while he helps lead our state is inspiring."

Gilchrist also reacted to our earlier post in two tweets:

"The Gilchrist family is just like so many families in Michigan who must balance childcare with work schedules. Sometimes, bring the baby with you is the only option.

"It is important that employers recognize these challenges and create environments that are flexible and accommodating for mothers and fathers who may need their children to be with them."

The role model for working dads now tweets an eight-second video from this week's event in speedy time lapse format:

I’m so thankful for everyone who showed up and showed out to give away 5000 turkeys to our neighbors for Thanksgiving. #AllStarGiveback pic.twitter.com/ElVcwBr7R7