Jimmy Doom (aka James Graham) plays a Two-Way Inn bartender in the new Altes commercial, which is below.

Altes, a lager born in Detroit around 1910, is back. Detroit National Brewing Co., a team of three metro Detroit natives who wanted a unique path into the craft beer industry, is the culprit.

The beer came into existence at Tivoli Brewery on the city's east side, was well-drank by Detroiters for decades, stopped its Detroit production in 1973 and then entirely disappeared in the 1990s. In the 1960s, Altes sponsored the Detroit Lions and Tigers. It resurfaced in fall 2016 at Traffic Jam and Snug in Midtown Detroit. 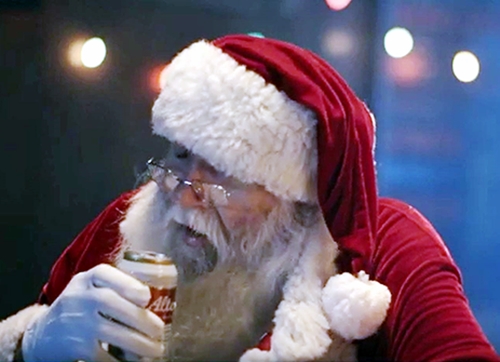 Santa hydrates on the east side after a long day.

The Two-Way at 17897 Mt. Elliott, which dates to 1876, was bought in 1973 by Harry Malak. His daughter, Mary Rose Aganowski, began working there at age 17 and now owns the business after her dad's death.

Frank drops this interesting backstory in her Crain's article:

The Two-Way Inn reunited with Altes via social media. Manager Danielle Pantalleresco posted a photo of an old Altes beer sign she found in the bar's basement on Facebook, and a commenter tagged the new brand.

Now she sells five cases of Altes a month and expects that to "skyrocket" after the holiday ads are released.

"Altes is one of those beers where there's a story that comes along with it, like, 'I remember my grandpa used to drink it at Christmas' and 'My dad drank it.' It's a generational beer."

Here's the first of the half-dozen commercials: