To say these aren't customary property-for-sale photos is like suggesting America has an unconventional president -- true and too mild.

Chris Hubel, a 31-year-old Realtor, stretches far beyond the norm by slipping into a Santa suit and face covering to pose in a Birmingham condo with his wife, Courtney Peters. She wears . . . well, what isn't typical for property listing galleries. (Six more photos of them in costume are below.)

Hubel believes in "pushing the norm of buying and selling real estate," he says on Facebook. The West Bloomfield resident began his sales career at a Waterford bike shop after graduating from Kettering High in that township. After rising to manager and staying 12 years, earned his real estate license in July 2017. 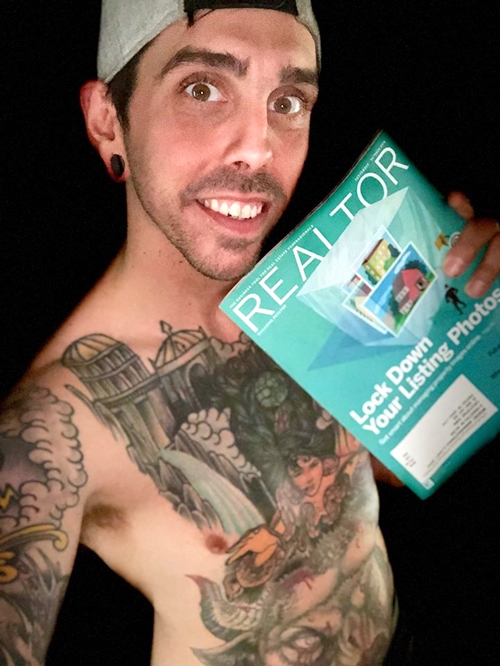 Chris Hubel: "Let us put it in ink."
(Photo: Facebook)

A year later, he and Peters, a graduate of Lahser High in Bloomfield Hills, started Inked Michigan Realty ("Let us put it in ink").

"If this is not how to effectively market a property -- I don’t know what is," Hubel tells WDIV in Friday night's newscast.

Unsurprisingly, one agent's innovation is an abomination in another's eyes. Reporter Victor Williams finds a critic of Hubel's creativity:

Traci Martin [of Max Broock Realtors in Bloomfield Hills] is calling the technique risky and reckless.

“People take desperate measures to get this 10 minutes of fame per se," Martin said. “He may achieve that with this certain listing, but I don’t think it's worth in the long run to be taken seriously as a professional."

Judge from yourself from these whimsical, edgy samples from the listing:

When you gotta show . . . a property creatively.