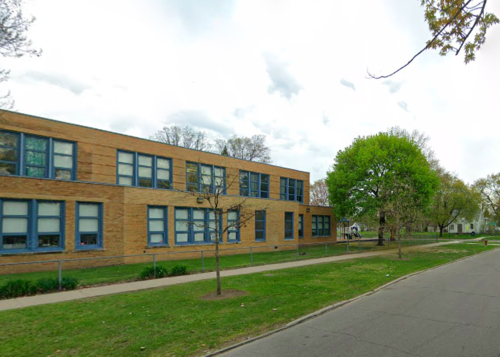 The Pulaski K-8 school building would close under the plan. (Photo: Google)

The Detroit Public Schools Community District has proposed a sweeping plan that would require some students to move to new buildings as the district figures out how to pay for $543 million in needed facilities upgrades.

Schools to be relocated to better buildings include Detroit International Academy and Pulaski Elementary-Middle School, The Detroit News reports.

[Detroit International Academy], located at the former Northern High School, will move to the GEE White Academy building. The former Northern building will be repurposed to serve as central office and the site of school board meetings. Vitti is also considering the development of a DPS Athletic and History Hall of Fame Museum at the building.

Pulaski, which is an older building that requires substantial investment, would be closed and its students and staff would relocate to the Adult Education East Building. The vacated Pulaski building would be used as an early learning center, [superintendent Nikolai] Vitti said.

"We would have to invest millions in that building," Vitti said of Pulaski. "We have adult ed down the road. It doesn’t make sense to make a multi-million investment in an old building."

School closures are controversial, but under this plan students would keep their teachers and curriculum and change only buildings.

The plan is part of a broader effort to bring more students to the district which, after a yearslong decline, recently edged out the city's charters in enrollment.

It also involves introducing an enrollment exam at two additional high schools -- King and Communications and Media Arts. Curriculum would be scaled up so the schools could better compete with high-performing charters nearby, The News reported.

Vitti is soliciting feedback from parents and students in a series of 11 public meetings, starting Thursday night, and is expected to unveil additional school relocation plans in the coming weeks.

He said he may ultimately propose a bond to cover the facilities costs, which are due to balloon to $1.5 billion if unaddressed over the next decade.