Kid Rock Strikes Back over Detroit Arena Split: 'Trying to label me racist is a joke'

Unsurprisingly, Kid Rock doesn't go quietly after an announcement that he and Illitch Holdings end a tenant-landlord deal next spring. (Our news story is below this update.)

The rapper posts Wednesday morning on Facebook that he "will not be renewing my licensing agreement for my Made In Detroit restaurant this April."

"[I] learned long ago [to] go where you're celebrated, not tolerated.

"I guess the millions of dollars I pumped into that town was not enough. . . . I may be guilty of being a loud-mouth jerk at times, but trying to label me racist is a joke and actually only does a disservice to the black community, which I have supported my entire life."

That's just a warm-up. He also doubles down in a Facebook follow-up just before noon:

The Detroit News jumps into the fray with an editorial headlined: "Hey, Kid Rock, Detroit is done with you."

The paper's editorial board praises the Ilitch organization for "a smart business decision."

No organization wants its name associated with an individual who dips into racism and sexism. . . .

He's gone out of control. Bad boy charm has given way to oafish crudity. He's getting too old to get by with simply saying "I was drunk." Being stinking pie-faced is not an alibi, it's part of the offense.

Detroit is a city striving toward unity and inclusiveness. It doesn't need public representatives who are determined to pull people apart.

"As our venues are open, inviting, inclusive and respectful to all, we look forward to bringing on an exciting new concept that aligns with our community and company values," says Chris Granger, group president of sports and entertainment. 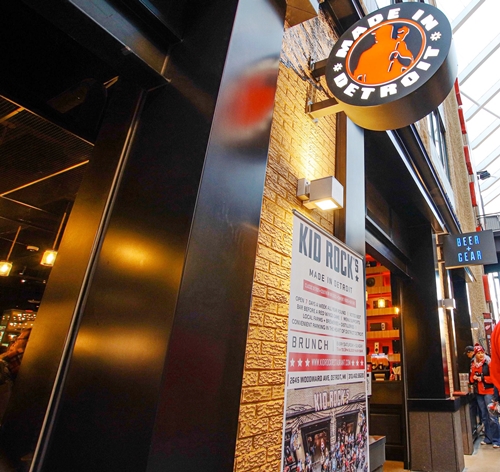 The rapper's restaurant opened in fall 2017 with the arena. (Photos: Facebook)

That's how the arena owner discloses nonrenewal of a licensing deal for Kid Rock's Made in Detroit dining spot, which expires in April. It says the rapper decided not to re-up, which seems like a face-saving way to kick him out. The restaurant opened in September 2017 with the arena, where Kid Rock was the first performer.

In its report of the news, Crain's Detroit Business notes the subtext behind that "inclusive and respectful to all" shot:

Kid Rock made headlines last month when he was captured on video at his Nashville bar Honky Tonk as he went on an apparently drunken, profanity-laced rant against media mogul Oprah Winfrey and "The View" host Joy Behar. . . .

Organizers planned a protest outside Kid Rock's restaurant on Woodward Avenue on Wednesday afternoon in response to his recent rant. 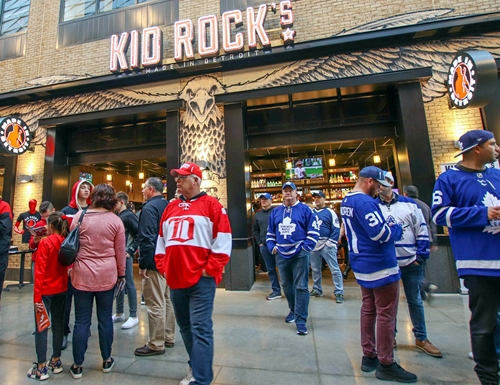 "What the Ilitches did when they placed [the restaurant at LCA] was an affront to majority [black] Detroit in the first place," Riddle told The News Wednesday after the Ilitch Holdings statement was published.

"You place the musical icon or the white supremacy movement and in a facility funded with corporate welfare on the backs of America's poorest and blackest city, Detroit. I'm glad the Ilitches have come to their senses."