First of all, we don't know why the Michigan Science Center was chosen as the site for a display of the notorious "fatberg" that clogged parts of a Macomb County sewer line last year. 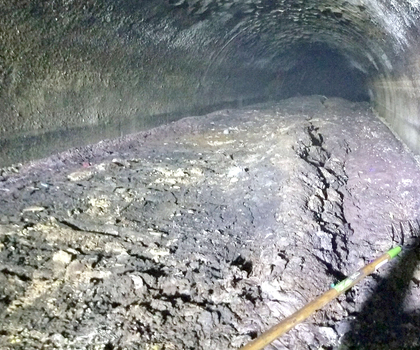 Anyway, Macomb County Public Works Commissioner Candice Miller has made fatbergs a cause, and is willing to stand next to chunks of them at press conferences, in an apparent vain effort to persuade the public to, first, stop pouring grease down the drain and second, to stop flushing SO-CALLED flushable wipes.

So now the fatberg is going to the Michigan Science Center, and like we said, we don't know why. Most visitors to that facility are children. Children don't pour grease down the drain. Their mothers do. And their grandparents are likely the ones using wipes, because...we'd rather not get into this part. It's disgusting.

Anyway, take that fatberg on a road tour of Michigan's senior centers next, if public education is truly the focus here. Do kids really want to see this?

The display will feature pieces of a 100-foot-long glob of fats, oils, grease and solids found in an 11-foot diameter pipe in Clinton Township. The so-called fatberg was as tall as six feet in some places and was removed by workers with hand saws and shovels. Last September, Miller said it cost the county about $100,000 to remove the fatberg.

(We imagine most of that $100K was distributed as bonuses to the poor public-works employees who had to take hand saws and shovels to an impacted bolus of bacon grease and grandpa's buttwipes.)

And people, if you're still reading: Bacon and other cooking grease should be poured into a can and kept in your refrigerator or freezer until solid, then thrown away in the regular trash. (If you're pouring it down the drain, who raised you? Seriously.)

As for the wipes: Trash can. One with a lid, please.