Dogs are part of the standard scene at Latcha+Associates, a Farmington Hills marketing agency. (Photos: Facebook)

As we relayed Friday from Automotive News, the Dearborn automaker lets 1,300 office workers have pooch companionship anytime -- a pilot program pioneered by its new chief financial officer, who likes having his 7-year-old shepherd, Finley, in his 12th-floor office. 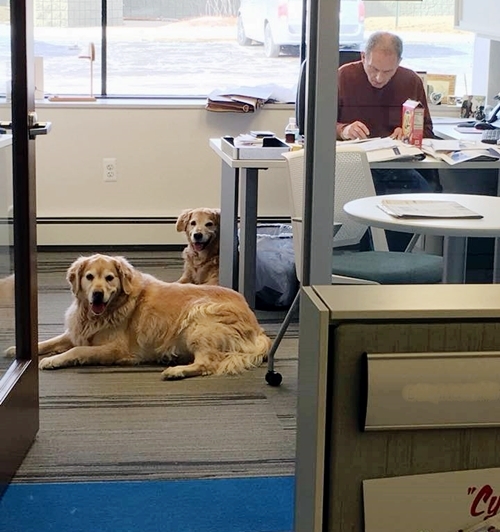 At SMZ Advertising in Troy, chairman James A. Michelson has office companions.

Similar scenes play out at Quicken Loans (see video below) and two Metro Detroit creative agencies -- SMZ Advertising, a 90-year-old Troy firm with great-grandchildren of the founder on its payroll, and Latcha+Associates, a 20-year-old Farmington Hills shop with more than 250 employees.

"We believe that the benefits of having pets in the office outweigh the risks to our carpet and upholstery," Latcha posts on social media. "That's why on any given day you’ll find a number of our four-legged friends roaming the halls, playing in the 3.5 acres of fenced-in yard or begging for treats and belly rubs."

At Quicken and its Rocket Mortgage affiliate in downtown Detroit, a three-year-old Paws at Work program allows two dogs at a time on each office floor.

In West Michigan, dogs are part of the environment at a national floor-cleaner business founded in 1876 by Melville and Anna Bissell of Grand Rapids. Nearly three-fourths of its workers have pets, says Bissell -- still a family-owned firm, now based in Walker, Mich. 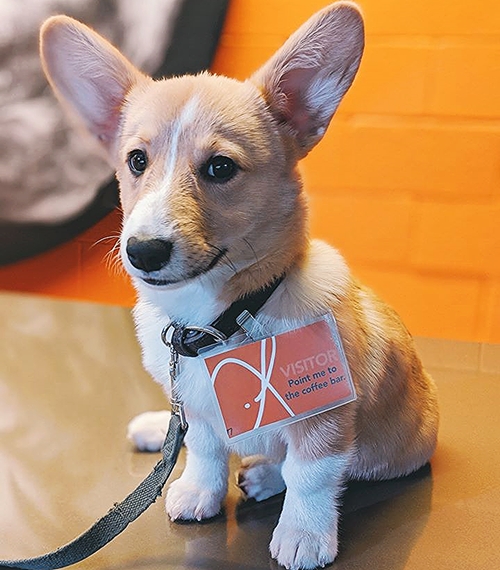 Ember, a guest at Latcha+Associates in Farmington Hills, wears a visitor badge as a gag.

The administrative complex includes a "dog spa" with an indoor play area, bathing stations and kennel with outside access. The company also supports dog shelters, pet events and animal rescues through its Bissell Pet Foundation.

"Not only does our dog friendly culture boost morale, but studies have shown that having dogs in the office helps with collaboration and trust between employees," the firm says in a blog post.

"When employees bring their dogs to work, it's hard to resist striking up a conversation. Bonding over doggy tales is a great way to get to know co-workers."

Fortune magazine reported last year on dog-tolerant offices, which it framed as a perk tailored "especially for pet-loving millennials."

Pet-friendly companies with open door policies that let dog owners to take their dogs to work often cite benefits such as a stress relief as one of the reasons for allowing dogs in the office. Some also highlight that dogs at work help employees break the ice during tense meetings and encourage more friendly socializing in the office.