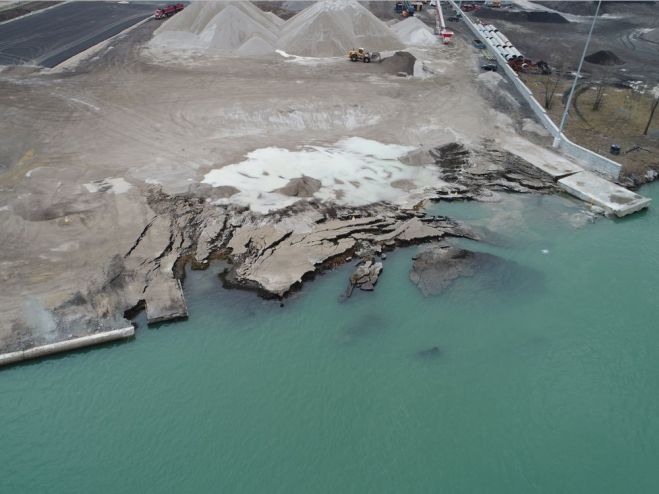 Water quality tests to determine whether a Detroit River shoreline collapse may have released harmful toxins into a nearby suburban drinking water intake will not be complete for weeks, officials said Sunday.

The tests will aim to determine whether metals, PCBs, PAHs and other industrial contaminants may have been released when the river sediment — laden with toxins due to decades of heavy industrial activity — was disturbed. The release of such chemicals may endanger public health and wildlife.

Additionally, the water authority is testing for radionuclides because uranium was processed on site in the 1940s. However, EGLE soil tests conducted Friday did not find harmful levels of radiation. The federal government previously remediated the site, which housed the Revere Copper and Brass plant until the 1980s.

Water pulled from the river since the collapse has likely already made it to residents, but officials say because an intake located several miles downstream was not in the direct flow route, it is unlikely to have been impacted.

"In light of this, as well as the positive outcome of EGLE's testing, the authority does not believe that there is any danger of this incident impacting water quality," spokeswoman Michelle Zdrodowski said in an email.

A customer service representative separately told Deadline Detroit that a water storage facility is located within the flow route, but GLWA officials later said raw water does not enter those locations.

The downstream intake, located on the Canadian side of the river, services downriver communities including Allen Park, Lincoln Park and Brownstown. It is one of two intakes along the river; the other, located upstream near Belle Isle, is unlikely to have been affected.

Water samples were taken from points upstream, downstream and in front of the Detroit Bulk Storage site. GLWA pulled water samples from a raw water tap within its Southwest water treatment plant.

The Environmental Protection Agency requires the authority to monitor levels of a wide variety of contaminants, including PCBs, PAHs and metals.

According to a Canadian academic researcher who's studied the river's sediment for decades, there is “moderate urgency” for environmental regulators to determine what chemicals may have been released.

“In that area you have sediment that is very highly contaminated,” said Drouillard. “You have high levels of PAHs (polycyclic aromatic hydrocarbons), PCBs, mercury and metals including lead, cadmium and nickel.”

Because the Detroit River is so fast moving, the toxic sediments over time get pushed against the shoreline on both the Canadian and U.S. side and never move unless disturbed, he said.

“This would have caused a very large disturbance of sediment with these chemicals redistributed in the water and carried downstream,” he said.

“At the drinking water intake you should be able to remove these particles, but you have reclaimed fish spawning reefs, wildlife refuges, wetlands and marshlands downstream which all will be impacted by this event.”

Some residents and community activists have blasted the state for what they consider a slow and inadequate response.

The collapse was first reported by The Star Thursday, a day after EGLE learned of it.

The Coast Guard, meanwhile, was reportedly alerted to what happened almost immediately, but did not share the information with any government agencies because it said it was unaware of potential risks.

“How in the world is it possible that we are hearing from Canadian news networks, days late at that, before we are hearing from our own authorities in charge of protecting us?” said Justin Onwenu of the Sierra Club. “Michiganders deserve emergency response systems in place that will assure communities that public health and safety is adequately protected.”