Low-income Detroiters now have until Dec. 20 to apply for property tax exemption

The city of Detroit is extending the deadline for low-income homeowners to apply for an annual tax exemption amid increased last-minute demand.

Officials say residents now have until Dec. 20 to apply for the poverty exemption, which eliminates half or all of a homeowner's tax bill for one year, depending on income. For the first time, the exemption also could help homeowners relieve past tax debts.

The deadline to apply was originally Monday.

One in three Detroit properties have been tax-foreclosed since 2008. (Photo: Steve Neavling)

The extension is part of a city effort to stem an ongoing tax delinquency crisis that threatens to further destabilize neighborhoods. Approximately 30,000 Detroit properties are on the brink of foreclosure each year — meaning their owners owe two or more years of taxes. Nearly a third of city properties have been foreclosed for unpaid property taxes since 2008.

Homeowners approved for the exemption could also eventually become eligible to have some of their past tax debts extinguished, should the state Legislature approve the so-called "pay as you stay" payment plan proposed this fall by State Rep. Wendell Byrd with support from Detroit Mayor Mike Duggan, Wayne County Treasurer Eric Sabree and Wayne County Executive Warren Evans. That plan would qualify homeowners with poverty exemptions for a payment plan that eliminates the interest and fees on taxes owed, and reduces overall debts to 10 percent of a home's value or less.

The poverty exemption has long been available to low-income Michiganders, but Detroit was sued by the ACLU in 2017 for making it too difficult to obtain. The city settled, promising to ease the requirements.

Still, only about a fifth of the more than 30,000 Detroit households believed to be eligible obtained the exemption last year.

more than two dozen people still waiting to apply for poverty tax exemptions at Detroit Board of Review with minutes to go til deadline. Staffer said no one could apply past this point but board of review chair Willie Donwell says they’ll accept applications into tomorrow morning pic.twitter.com/99kEd3RTfz 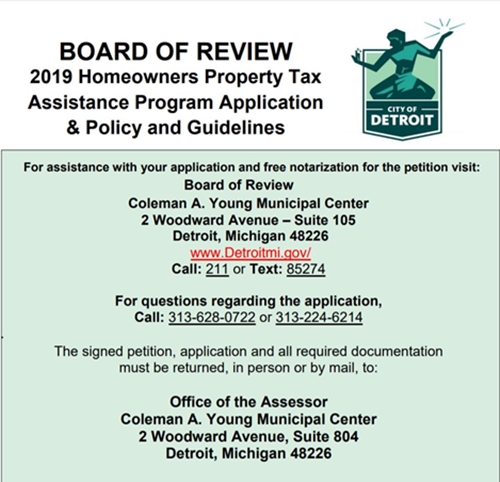 This year, however, following last-minute promotions by the city, nonprofits and philanthropies, a steady stream of people showed up at city hall to submit their paperwork throughout the Monday deadline. By 4:45 p.m., as the office was closing, more than two dozen people remained in line.

City officials said Monday night that they're on pace to "approve the largest number ever of PTEs this year – well over 6,000."

The poverty exemption application can be found here. Additional information is available on the city of Detroit's website.