Hush money: UM pays $1.2M in 6 months to ex-employees who must keep mum

The payments over half a year in 2018-19 exceed $1.2-million, The Michigan Daily discloses in an eye-opener splashed across the top of Tuesday's front page. "Buying Silence" is how the headline begins.

Negotiated agreements between the university and recipients include non-disclosure and non-disparagement clauses, which are customary in termination settlements to head off possible lawsuits.

An investigation by The Daily into agreements reached between the university and former employees from November 2018 to April 2019 uncovered 10 such agreements across different schools and departments. These settlements do not appear in public University documents.

These agreements include “gross lump sum” payments by the university totaling more than $1,265,000. Of this sum, approximately $1,016,000 was paid to former employees. $149,000 was paid to law firms representing these employees.

All 10 recipients declined to comment to The Daily. "The nature of their agreements prevents them from disparaging the University and discussing the terms," the undergraduate journalists note.

Their Freedom of Information Act request may not have uncovered all such settlements during that time. 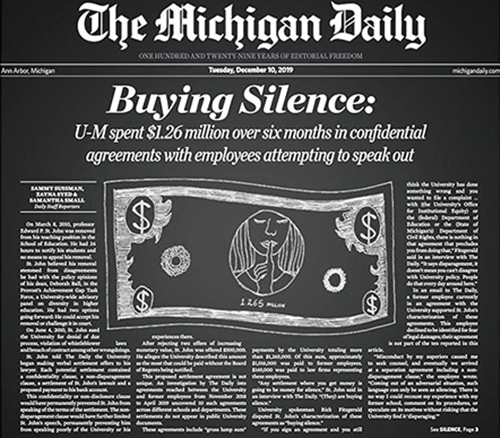 The extensive investigation quotes former education professor Edward St. John, who rejected a settlement after being removed from teaching. He sued in 2010 for for denial of due process, violation of whistleblower laws and breach of contract.

"Any settlement where you get money is going to be money for silence,” St. John said in an interview with The Daily. “[They] are buying silence. . . . Once they start making offers, they are admitting they're wrong. But you can't speak to it."

The outcome of his lawsuit isn't specified, though the campus papers implies he lost: "St. John knew it would be difficult to win a lawsuit against such a large institution."

St. John's view of the agreements as hush money is shared by someone who accepted UM's offer. "This [past] employee declined to be identified for fear of legal damages," The Daily says. "Their agreement is not part of the ten reported in this article."

"Misconduct by my superiors caused me to seek counsel, and eventually we arrived at a separation agreement including a non-disparagement clause," the employee wrote [via email]. "Coming out of an adversarial situation, such language can only be seen as silencing.

"There is no way I could recount my experience with my former school, comment on its procedures, or speculate on its motives without risking that the university [would] find it 'disparaging.'"

The Daily's 3,200-word article is by Sammy Sussman, Zayna Syed and Samantha Small.

They also quote UM spokesman Rick Fitzgerald, who says settlement deals don't keep ex-employees from contacting to the U.S. Department of Educatrion or Michigan Department of Civil Rights if they "still think the university has done something wrong and [they] wanted to file a complaint."

"There is nothing in that agreement that precludes you from doing that," Fitzgerald said in an interview with The Daily.

"It says disparagement, it doesn’t mean you can't disagree with university policy. People do that every day around here. . . .

"It's not meant to silence people. It's meant to not get in a fight with people once they settle." . . .

Fitzgerald confirmed that these agreements are not routinely disclosed to the Board of Regents or the public.