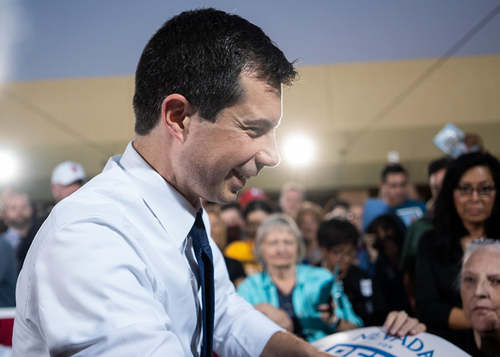 Pete Buttigieg's rise in the Democratic presidential primary may hit a snag in Michigan, with news that he helped the state's largest health insurer identify cost cuts ahead of a turbulent period of layoffs and proposed rate hikes.

The South Bend mayor revealed Tuesday that his work at controversial global consultancy McKinsey included a 2007 stint with Blue Cross Blue Shield of Michigan, where he previously indicated he performed “analytical work as part of a team identifying savings in administration and overhead costs.”

Buttigieg made his full client list public after McKinsey released him from a non-disclosure agreement Monday. The New York Times reports the BCBS item may be the most "politically troubling" for the candidate.

The list is likely to provide ammunition to those in the liberal wing of the Democratic Party who have ... argued that his “Medicare for all who want it” health care proposal, which would preserve private health insurance, is a sop to the insurance companies.

While it was not yet clear exactly what Mr. Buttigieg did at Blue Cross, his work appeared to come at about the same time the insurer announced that it would cut up to 1,000 jobs — or nearly 10 percent of its work force — and request rate increases.

The company also announced that it was freezing pay for nonunion workers and cutting discretionary spending by 25 percent. In an interview published Tuesday by The Atlantic, Mr. Buttigieg said he was taken off the Blue Cross project in 2007, well before the layoffs were announced.

Blue Cross was under fire from then-state Attorney General Mike Cox ahead of the January 2009 cost-cutting announcement. In 2007, the Republican released a report accusing the insurer of putting "profits over people," writing that BCBS, its profits soaring, had gone on a "spending spree" that included significant salary and benefit hikes for top officers. Meanwhile, Cox wrote, Blue Cross was trying to raise premiums on Michiganders, including a proposed 50-percent increase for seniors receiving its Medigap insurance.

The report was issued in response to a bill that would have prevented state AGs from objecting to proposed rate hikes.

The Times reports the layoffs came after the insurer said it suffered approximately $140 million in losses related to health care plans purchased by individuals.

Buttigieg told The Atlantic Tuesday that he ended his relationship with the insurer before the layoffs, but The Times reports that in 2011 Buttigieg alluded to having helped trim staff, apparently pointing to the gig as evidence he could "reimagine" South Bend's budget.

“One of the things I did for a living was just that,” Mr. Buttigieg said during a candidate forum. “So I remember one client organization that was a large insurance firm that had grown in such a way that there was a great deal of duplication and some people didn’t even know what the people working for them were doing.”