Detroit police and firefighters are on the scene of a partially derailed train on an overhead track in Southwest Detroit.

The @DetroitScanner Twitter account is monitoring the situation and reports that a 151-car train was traveling south and 11 empty cars have turned over. 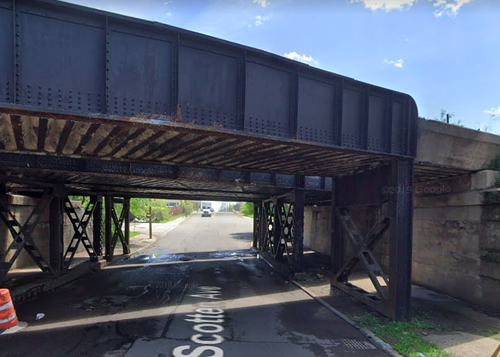 A Google Street View of Scotten and Bangor, near the site of the derailment.

The derailment appears to have happened near the intersection of Scotten Avenue and Bangor Street. Police are treating it as a Level 1 Hazmat situation, the lowest-danger level, due to unknown materials on the train. There are also power lines down as a result of the accident.

You can find the Detroit Scanner Twitter news feed here.