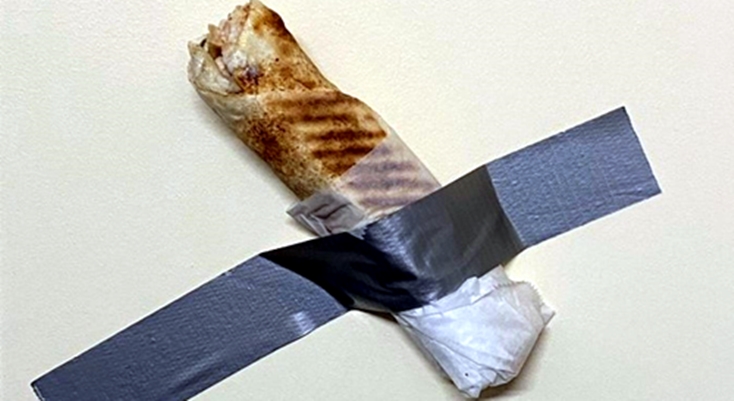 A Metro Detroit museum manager shows how to seize the moment.

Matthew Stiffler, research and content manager at the Arab American National Museum, grabs attention by spoofing a widely seen bit of dubious "art" with this culturally appropriate Dearborn stunt above.

A banana duct-taped to a wall was sold for $120,000 at Art Basel Miami https://t.co/dpQyPNu2FI pic.twitter.com/A5pfQpJhLA

"It was just a funny thing, but we also want to make a claim that when there are conversations about art happening, Arab Americans have something to say." . . .

The manager credits curator Elizabeth Barret-Sullivan with suggesting shawarma when he proposed the gimmick.

The museum bought the sandwich from Country Chicken, a Arabic restaurant in Dearborn, without alerting the chef that it would turn into a work of art, said Stiffler.

A museum tweet showing the wall-worthy shawarma, identified as "New art piece for sale," is shared about 270 times and earns nearly 900 "like" hearts.

"I’d much rather eat that than a banana," one comment says. "Is there hummus and tabouli salad with that?