Detroit to inspect businesses operating along river after aggregate spill 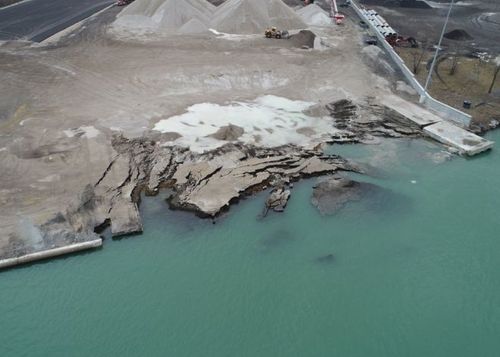 Companies storing large piles of materials along the Detroit River will be inspected "immediately," the city's building and safety department says, after it found the company involved in an aggregate spill that threatened to contaminate the river operating without the proper permit.

The Nov. 26 collapse occurred when a dock leased by Detroit Bulk Storage gave way under thousands of pounds of aggregate, ripping open the seawall and sending the material into the river.

The event was feared to have disrupted toxins stored in the riverbed, though water testing conducted more than a week after the spill found the river water to be safe. Additional testing for radiation, as the site was previously used to process uranium, also came back negative.

"Going forward, all commercial properties on the water will have their seawalls inspected by a third-party engineering firm to ensure their structural integrity and ensure they can store the loads they are storing," Paul Max, general manager for environmental affairs of the City of Detroit’s Buildings, Safety Engineering and Environmental Department, was quoted by the Free Press as saying.

Max was on hand with other officials at a Thursday night meeting in Detroit to provide details on the spill and the government response.

State environmental officials learned of what happened a week after the fact. The Coast Guard knew of the spill immediately, the Windsor Star reported, but did not alert other agencies.

At the meeting, state and federal lawmakers on hand urged state officials to oversee the clean up, rather than have Detroit Bulk Storage handle it, as is planned.

Representatives from the Great Lakes Water Authority did not attend the event. Their testing of the drinking water system is not yet complete. The downriver area gets its drinking water from an intake downstream of the site.