Gretchen Whitmer a possible VP pick in 2020? The Washington Post thinks so

In newspaperland, it's the season of ranking the year's top films, songs, shows, photos and news events, as well as crystal ball-gazing.

A Washington Post version of the looking-ahead game is a "2020 Power Ranking" series in the opinion section that's a campaign version of horse racing odds, only with higher stakes.

The latest installment switches from handicapping Democratic presidential candidates and turns to "something totally different: analysis of the horse race to become the Democrats’ vice-presidential nominee!" 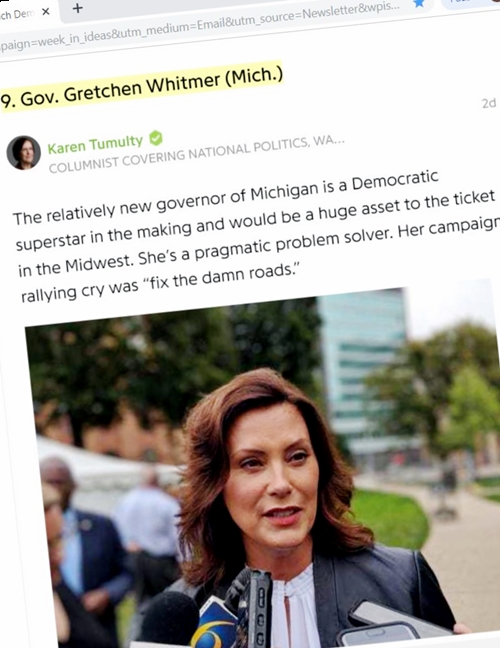 Post pundits list "the 15 people with the best shot at the VP nomination." Michigan Gov. Gretchen Whitmer snags the No. 9 spot, right after Elizabeth Warren.

Columnist Karen Tumulty calls her "a Democratic superstar in the making [who] would be a huge asset to the ticket in the Midwest. She's a pragmatic problem-solver."

Whitmer is among nine women and six men considered in a rundown that starts with Sen. Kamala Harris of California and Stacey Abrams of Georgia, in that order. Two other governors rank below the Michiganian -- Michelle Lujan Grisham of New Mexico and Gina Raimondo of Rhode Island.

This weekend's journalistic exercise includes an acknowledgement that everyone below the top two names is a longshot. "All but one of the candidates remaining on the debate stage are white," opinion writer Jennifer Rubin notes. "That strongly suggests the VP will not be white."