Rep. Elissa Slotkin, a former CIA analyst who did three tours in Iraq, knows more than a bit about risks and duty.

Now, as a first-term congresswoman in a Metro Detroit district previously held by Republicans for nearly 20 years, she stands up to explain why she'll vote Wednesday for impeachment.

"I can hear that this is a very controversial decision — and I knew that," Slotkin said Monday at a raucous Oakland University town hall, The Washington Post reports.

"And all I can ask from the people who are listening is that while we may not agree, I hope you believe me when I tell you that I made this decision out of principle." 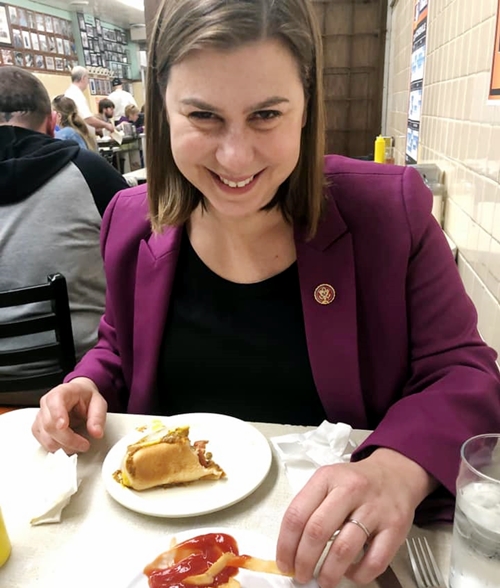 Elissa Slotkin at a Detroit Coney Island in May. (Photo: Facebook)

"This is bigger than politics," she told about 450 people on the Rochester campus, where "a constant chorus of heckling and insults from Trump’s backers ... began even before the 43-year-old freshman lawmaker had said a word," according to The Post.

For an illustration of just how partisan and poisonous the debate over Trump’s impeachment has become these past several months, it would be hard to outdo Monday's town hall in the frigid quiet of Detroit's suburbs.

The Detroit Free Press, describing the hecklers as "a small cointingent," writes:

The majority of the audience, however, was in Slotkin's corner, giving her several standing ovations during the 60-minute meeting.

Local admirers also include former federal prosecutor Barb McQuade, now teaching law at the University of Michigan and appearing regularly as an MSNBC commentator. "Appreciate your profile in courage, ⁦Elissa Slotkin⁩," she tweeted Monday evening. "Impeachment vote may cost you your seat, but you can be proud of putting your duty to your country ahead of your self-interest."

Slotkin, who lives in a Holly farmhouse, is the focus of a New York Times article posted Monday night. A congressional correspondent intrerviewed her at home and attended the Oakland event because the House newcomer represents a political pivot point.

The story of how she arrived at her impeachment decision is the story of so many moderate Democrats in this year's historic freshman class. Moved to run for public office to counter the rise of Mr. Trump, they flipped Republican seats and are now in danger of becoming one-term members of Congress — possibly costing their party control of the House — over a decision they tried mightily to avoid. ...

"I didn't dream of being a politician my whole life," Ms. Slotkin said in an interview on Sunday. ... "And if this district sees fit to elect someone else, then I will accept that and walk away with my head held high that I’ve made decisions based on principle, and not political calculus."

In media comments at OU after the forum, Slotkin said: "If you live your life only looking at polls and only figuring out how to keep this job another two years, you are in it for the wrong reasons."

Earlier in the day, she tweeted: "In the national security world, we are trained to make hard calls, even if they are unpopular -- if we believe the security of the country is at stake."

Background in The Detroit News' coverage shows how gutsy she is:

Slotkin said she recognized that her decision to support impeachment was a risky one in the swing district. Of the thousands of phone calls, letters and emails her office received regarding the impeachment vote, a little more than half were against impeachment, she said. . . . "But you have to do what you're trained to do," Slotkin told reporters Monday.