The heart of Detroit: Sisters who lost mom to overdose see a city's compassion 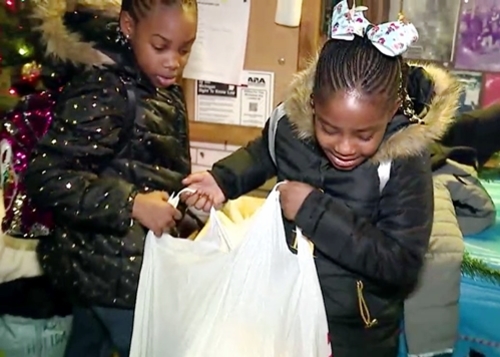 With uplifting scenes and words, Taryn Asher reports at Fox 2 News on "an overwhleming response" from donors touched by a holiday season tragedy on Detroit's east side.

The sisters above, Cassiah and Lavaeha Edwards, called 911 after finding their mother and three others unconscious in a Caldwell Street home near Mound and McNichols. One man was revived, but their parent and two others died from drug overdoses.

For Detroit Fire Department medics who responded first, "it was a tough scene and it hit home for a lot of us," Lt. Jeff Gaglio tells Asher in the video below.

"A lot of us have young kids at home, and for these two girls to go through something like this is pretty devastating.

"They were very strong, that is what impressed us the most," Gaglio said. "They were extremely strong in the situation they were put in and they handled it phenomenally."

After staying with the girls for a few hours until their father took them to his home, Gaglio knew he needed to help.

The lieutenant contacted Patti Kukula, executive director of the Detroit Fire Foundation, who spread the word. See and hear about the response in the two-and-half-minute newscast segment, which includes the girls' grateful father, Cameron Edwards.