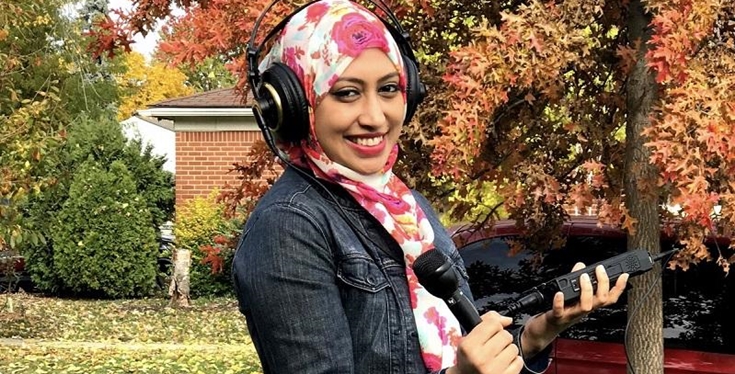 "I struggled with finding my identity and standing out on my own terms, as a hijabi woman and as a journalist." (Photos from Nargis Rahman)

Nargis Rahman opens an arched doorway into life as a visibly Muslim journalist in Metro Detroit.

"As a freelance writer, I counter the negative narrative of Islam and Muslims by showing up to cover important news, events and stories," the 2010 Wayne State graduate says in an "interview with myself" at the blog of Haute Hijab, a lifestyle brand in Manhattan.

I interview various subjects in my hijab, [including] people who aren’t expecting to see someone like me.

Her work has appeared in Eater Detroit, Tostada magazine, the Yemeni American News, Model D, Detroiter Magazine, The Muslim Observer, Brown Girl Magazine and Metro Detroit Mommy. She was a 2018 food journalism fellow at WDET as part of a training program called Feet in 2 Worlds, and uses "NargisTheWriter" as a social media tag. 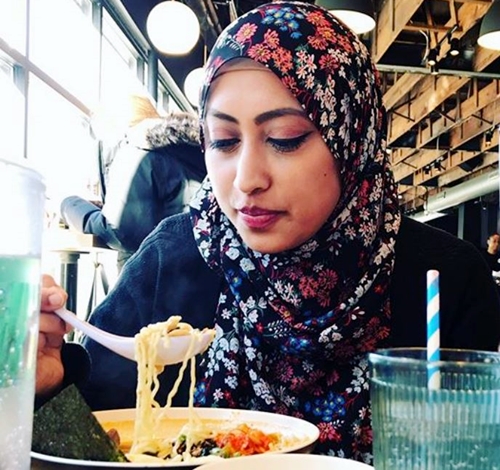 The writer, shown at Ima in Detroit, says: "People were nicer and more willing to speak to me ... after the color change" to brighter styles.

Rahman, a Bangladeshi-American mother of three who lives in Warren, presents Friday's 1,500-word post as a way to explain "why it’s important to me to be visibly Muslim as a journalist" and "unapologetically Muslim in public spaces."

Hijab became a big part of my life when I was nine years old. However, I didn't fully embrace the power of hijab until much later in life. Throughout my life I struggled with finding my identity and standing out on my own terms, as a hijabi woman and as a journalist.

Hijab is my dignity and honor, a means for me to have nearness to Allah, and a way for me to give dawah to others (educating people about Islam and Muslims). ... I try and keep the door open for people to ask questions about Islam to provide positive narratives about Muslims.

The diary-like blog contribution serves a dual purpose. It's written for hijab wearers -- shoppers, the site host hopes -- as part of a "Wear It Like You Mean It" campaign by Haute Hijab. It also educates others about Islam and its followers.

For each audience, Rahman traces her transition from one-color head coverings to more exuberant fashions:

Until middle school, I primarily wore white or black hijabs. ... I had always wanted to just blend in and not be noticed. ...

I [later] realized that I should celebrate my faith and attempt to better represent my faith, which I was passively doing so through what I wore. ... I didn't have to be flashy, but I also should look "approachable," I thought. ...

I noticed people were nicer and more willing to speak to me (I usually introduce myself first) and ask questions about Islam and Muslims after the color change.

I also realized I could look nice, and there was nothing wrong with that in Islam. It improved my mood and helped me express myself. Now, I purposely don't wear black hijabs to work often, although I have eight black hijabs and it's my favorite hijab color.

There are also a lot more options for hijab colors, styles and prints than there were even just 10 years ago. Now I typically wear a long dress, a cardigan and a bright-colored or floral print hijab.

Rahman came to the United States from Bangladesh at age 2 with her parents. She grew up in Florida and moved to Hamtramck with her family in 2000.

Looking toward "what will probably be a difficult election cycle for many of us," she writes:

I will continue to be a visibly Muslim woman in 2020, because it makes me who I am. ... My hijab represents confidence, solidarity and my unwavering faith in Allah to take me where I am needed most.