Toxic slime concerns linger as state works to keep it out of Lake St. Clair

After scrambling to deal with hazardous chemical waste oozing onto I-696 in Madison Heights, state and federal teams now are working to protect Lake St. Clair from contamination.

"The current cleanup actions are a temporary remedy to a larger problem," says a new situation status page posted by Michigan's Department of Environment, Great Lakes and Energy (EGLE). "A long-term remedy to address contaminated soil and groundwater is necessary."

The substance is believed to be a cancer-causing chemical called hexavalent chromium. It migrated through groundwater from Electro-Plating Services (EPS), a former industrial firm at 945 E. 10 Mile Rd. in Madison Heights, according to the U.S. Environmental Protection Agency. 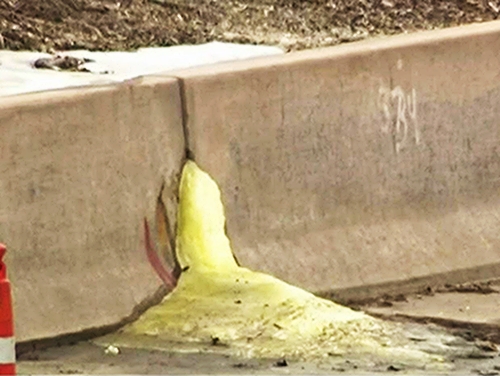 It only looks like a horror movie scene.
(Photo: Twitter/EGLE)

The state forced EPS to close in 2016. Owner Gary Sayers was convicted last month of operating an unlicensed hazardous waste storage facility, sentenced to one year in federal prison and ordered to repay the EPA $1.5 million for cleanup costs, according to EGLE. Sayers has until February to begin his prison term.

A 2017 EPA cleanup removed hazardous chemicals and pumped contaminated liquid from a basement, but the state update says that only "addressed the immediate hazards on the site, but was not intended to address all environmental impacts."

Crews are vacuuming sewers and water catch basins in an attempt to stop the chemical from reaching the lake, but at this point no one knows how long it has been seeping into the groundwater. ...

Right now, there is a sump pump draining the basement where water mixed with this cancerous chemical. The dangerous mixture is going into an on-site container.

The station's reporter was startled Monday to see the site and container remain publicly accessible.

I went there and was surprised the area isn’t secured to be honest. The building has condemned signs on it but the outside area where the container is holding chemicals being sucked out of the basement is wide open! Not even caution tape or warning signs @wxyzdetroit https://t.co/4m0zoX2SNB