Video: Robotic vehicles will deliver food in Ann Arbor soon. Detroit may be next. 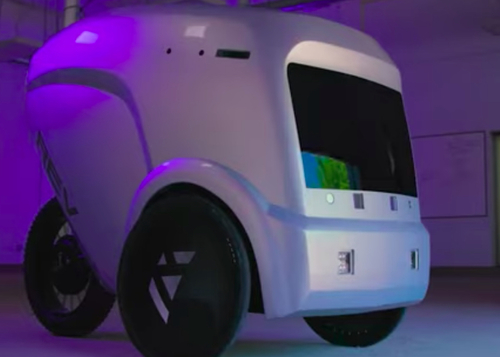 Ann Arbor will be the site of a robot-delivery experiment starting next week with food to go, The Detroit News reports.

A company called Refraction AI will begin running an autonomous vehicle known as the REV from four restaurants to a group of 300 customers living within a two-mile range. The participating restaurants are Miss Kim, Belly Deli, Tios Mexican Cafe and Chow Asian Street Food.

Five feet tall, with three wheels and a fuselage like an oversized bike helmet, the 100-pound REV promises food drops for half the cost of existing delivery services like Grubhub, EatStreet and DoorDash.

If successful, REV could begin the transformation of downtowns into "Blade Runner"-like metropolises populated by wee bots hustling meal, grocery and document deliveries along byways at 15 mph.

The News observed a trial of the service in recent days

...Just 30 inches wide, the REV-1 navigated city streets as a bicyclist would — using bike lanes where possible, or hugging curbs and parked cars. Sidewalks are off-limits. Much of REV's delivery model is built around the e-bike ecosystem that has become commonplace in U.S. cities.

“Eighty-ninety percent of our travel is not in a bike lane. We travel in the margin of the road,” said Johnson-Roberson, 36. “The biggest problem we face is a car door opening on us — just like a bicyclist. Small pets are a real tough problem — and squirrels.”

Customers order via app. When the REV arrives, it sends a notification, and the customer comes out to extract their food. The cold weather on the day Payne observed did not seem to be a problem, but the company's CEO said potholes could be, and the company is building a vehicle "robust enough that it can hit them and keep moving."

Look for the REVs on Ann Arbor streets beginning Jan. 3. The company hopes it can expand to Corktown in Detroit soon, as well as Madison, Wis. and Palo Alto, Calif.

A company video of the vehicle shows it navigating a November snowstorm.