Hot on the heels of her competition's list of 12 restaurants that defined a decade of dining in Detroit, The News' Melody Baetens asks the more direct question: Yeah, but what were the best things to actually eat in 2019, and comes up with a pretty good list, too. 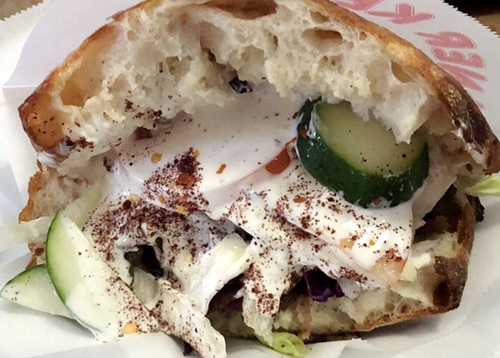 Some of you lucky people may have the rest of the week off, and are sick of either cooking or reheating leftovers. Before your 2020 diet starts -- and maybe even after -- you could do worse than checking out some of Baetens' faves, which include:

Döner kebab at Balkan House: This should come as a shock to no one. One of the happiest restaurant stories of the year is when the local food media blew up this Hamtramck spot and they had lines out the door for days of people wanting to try the now-famous doner kabob. The bump in business was enough for them to expand to a second location in Ferndale. I love everything about this döner kebab: the bread, the savory, greasy meat, crunchy cabbage, the sprinkle of purple sumac on top and that secret doner sauce. 3028 Caniff St, Hamtramck. (313) 262-6234. 314 W Nine Mile Rd, Ferndale. (248) 268-4920.

(Psst. Deadline Detroit checked out this spot, too. We absolutely approve the above message.)

Empanadas at Latido at Joebar: Every time I saw emapandas on a menu this year, I ordered them, but none were as satisfying as the ones chef Michael Barrera presented at Latido, which debuted inside of Hazel Park hangout Joebar in January. Stuffed with beef, olives and hard-boiled egg, they're like the traditional Argentinian variety, which is where I fell in love with these Latin dumplings (they get delivered like pizza in Buenos Aries). 23839 John R, Hazel Park. joebar.com. Also great: Empanadas at Smith & Co. in Midtown made with Corridor Sausage's chorizo, salsa verde and pickled shallots.

(Deadline Detroit ate those, too. Yum.)

For the rest, you'll have to click through, which we recommend.