Members of the collective face the camera below. (Photos: Alex Austin)

A new Detroit campaign with a provocative name and a bold manifesto invites others to learn about its "fierce commitment to the advancement of sexual and reproductive liberation."

Sex Militant, as the collective of artists and activists calls itself, hosts its first public meeting next month to discuss "sex rights organizing."

You may already share at least some of the positions advocated -- such as reproductive rights, transgender rights and sex work decriminalization. "Abortion is healthcare," one of its tweets says. "We accept nothing but total support for this constitutionally protected right."

"Anyone can be Sex Militant," its website says. "We are you and you are one of us." 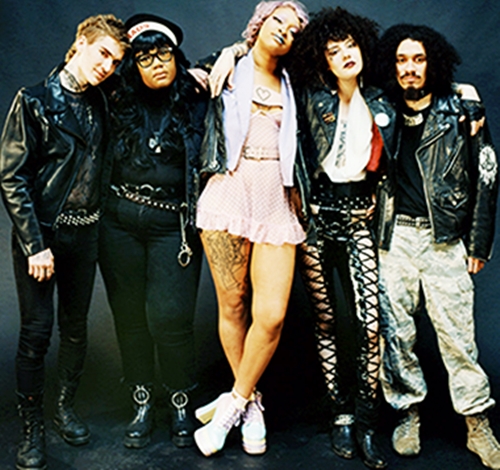 Founding members of the collective, who aren't named with this photo at their site.

The militant part involves "performance, advocacy and direct action" to be determined, according to an event listing for the follow-up to a Dec. 17 organizing meeting that at Planet Ant. That Hamtranck event space, 2320 Caniff Ave., also is the site of a Jan. 28 discussion from 7-9 p.m.

The collective, describing itself as "a platform for action and organizing," embraces a power-to-the-people spirit of earlier political and social movements. Here's part of its rallying cry to stick it to "the power structures which benefit and profit off of sexual oppression:"

"We believe that the free expression of sexuality is critical to our physical, emotional and social well-being and that each human being is entitled to full bodily autonomy and integrity. However, the state has sought to police sexual identities, reproduction and sexual behaviors between consenting individuals through repression, marginalization and punishment ... and we are fighting back.

"The sexual rights of all persons must be protected, respected and fulfilled.

"To be Sex Militant is to be fiercely committed to the advancement of sexual and reproductive liberation. Sex Militants are networked for action and empowered to shamelessly advocate for the protection, respect and fulfillment of sexual rights for all people. ... We are no longer waiting for representation and permission to challenge the daily injustices levied against our bodies.

"We, who have limited power and resources, will innovate and develop tactics that meet our needs and engage in strategies that are justifiable in response to the force of those who seek to control us. ... We recognize the need to employ a diversity of tactics. ...

"Society’s discomfort with public expressions of sexuality is a symptom of moral tyranny, and we threaten this tyranny through visibility, performance and political confrontation. Action, directed and organized by the people, is necessary." 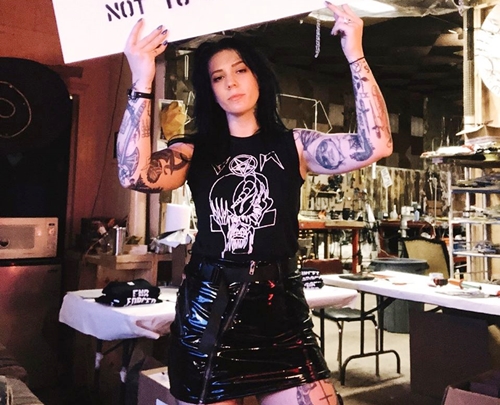 Reinforcing that take-it-to-the-streets language, the collective has an everyone-welcome style:

"There is no membership model or fees, no approval process and no oversight. If you identify with our beliefs, pillars and approach you are a Sex Militant."

In September, Blackmore curated a two-night multimedia exhibition and performance event titled "Sex Militant" at a Chicago cultural center. It focused "on the connection between eroticism and state violence," as well as "the aesthetics of resistance and collective organizing as a means of social, sexual, and political liberation," her description says.

The Chicago Reader weekly newspaper wrote: "The show was political, full of tension and incredibly powerful."