Harbaugh and Michigan play another sad trombone for bowl season

It was five years and a day or two ago that John U. Bacon, the Ann Arbor-based author and sportswriter, wrote a column in the Wall Street Journal on the arrival of Jim Harbaugh -- or "James Joseph Harbaugh," in the overheated parlance of a certain sort of sportswriting. 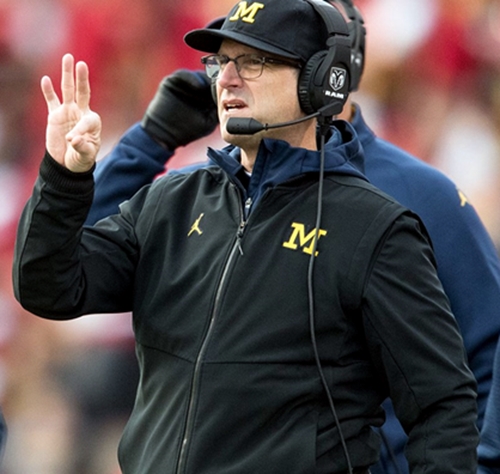 It's paywalled if you don't have a WSJ log-in, but it's impossible to read it today without feeling a little cringey embarrassment on Bacon's behalf:

The private jet cut through the clouds and eased onto the airstrip at Detroit Metro Airport, just a few miles from where Charles Lindbergh once tested World War II bombers.

This plane’s mission wasn’t nearly so serious. But the joy it gave to the people below probably exceeded just about everything since V-J Day.

Harbaugh, of course, was the San Francisco 49ers to a Super Bowl appearance before descending from the clouds to land in Ann Arbor, where all were convinced that this time, dammit, they got it right. This time, they had the coach, a "Michigan Man," etc. etc. blah blah blah, who would return the Wolverines to their accustomed place atop college football.

(Or near it, anyway. It's the University of Michigan, after all, an elite public Ivy, not Louisiana State.)

Things haven't worked out that way. Needless to say.

Shawn Windsor in the Freep is pretty down in the mouth, following Michigan's loss to Alabama in the Citrus Bowl. Harbaugh, he said, was hired to "win big," but:

Until he finds and develops an elite quarterback, he won’t.

He’s tried everything else.

Alabama? U-M hasn't even been able to beat MSU consistently in the last five years, and has dropped five straight to Ohio State.