The party's over, folks.

As part of today's news conference on Detroit crime statistics, Police Chief James Craig announced no fewer than 14 individuals had been identified as participants in a crowd firing weapons at the sky on New Year's Eve. 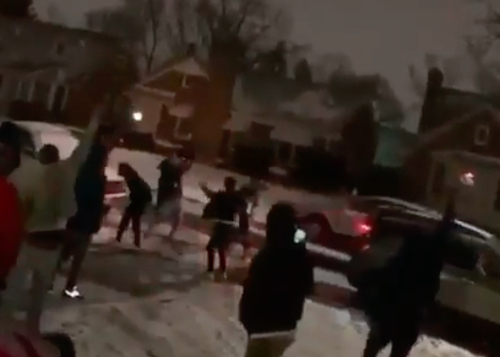 A video of the barrage of gunfire, posted on social media, quickly went viral. You can see it here.

While firing guns at midnight is a custom of long standing in Detroit, police and others advise against it year after year.

The fusillade in the video was on the west side, WXYZ reports:

According to Craig, the viral video was taken in the 9000 block of Warwick on the city's west side, just off Joy Rd. between the Southfield Freeway and Evergreen.

Craig said through the relentless efforts by the department, they identified everyone involved as part of a west side gang.

Not only that, two were wearing ankle tethers, making them probation violators as well.