Federal law enforcers signal that they could try to place the United Auto Workers under grovernment oversight.

For the first time, court documents this week use a meanacing legal phrase in a corruption case involving a former UAW official. Vance Pearson, a past regional director, now is charged with participating in "a racketeering enterprise" inside the union. 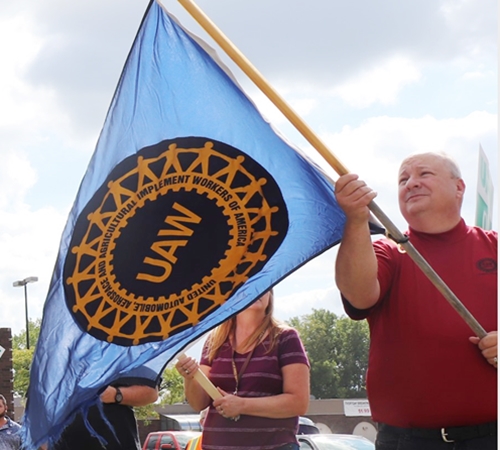 A once-clean union now is compared to the mob-connected Teamsters of the past. (Photo: Facebook)

Deliberate use of the word "racketeering" signals a more ominous turn in the years-long investigation, increasing the likelihood that an entire cadre of UAW leaders — if not the union itself — could be charged with running a criminal enterprise that spanned the country, sapped the UAW's financial resources and destroyed its reputation.

Should that happen, federal oversight of the union would be all but guaranteed. Financial monitoring probably would follow. Changes to internal governance structures and the UAW constitution likely would be conditions of any consent decree between the union and federal authorities. And the union's ability to self-govern would be suspended.

In separate news coverage, the paper notes that Monday's filing in Detroit "is the government's first public reference to racketeering — a term often associated with organized crime — during a nearly three-year prosecution of UAW officials involved in corruption."

Howes hammers home the significance. Until now, he writes, the UAW's "reputation as a 'clean' union stood in stark contrast to, say, the International Brotherhood of Teamsters and its links to organized crime."

Like the Teamsters more than 30 years ago, the "culture of corruption" inside the UAW's leadership ranks threatens to invite federal oversight of the union and fuel a move to amend the UAW constitution to enable the direct election of officers, including the president.

Ex-UAW Official Expected to Cop a Plea After Disclosure of $60,000 Cigar Tastes, Jan. 6