Coming home with a new baby is nerve-wracking enough for a young couple, but having a pair of masked neo-Nazis standing on your porch taking photos of your address at night really puts it over the top. 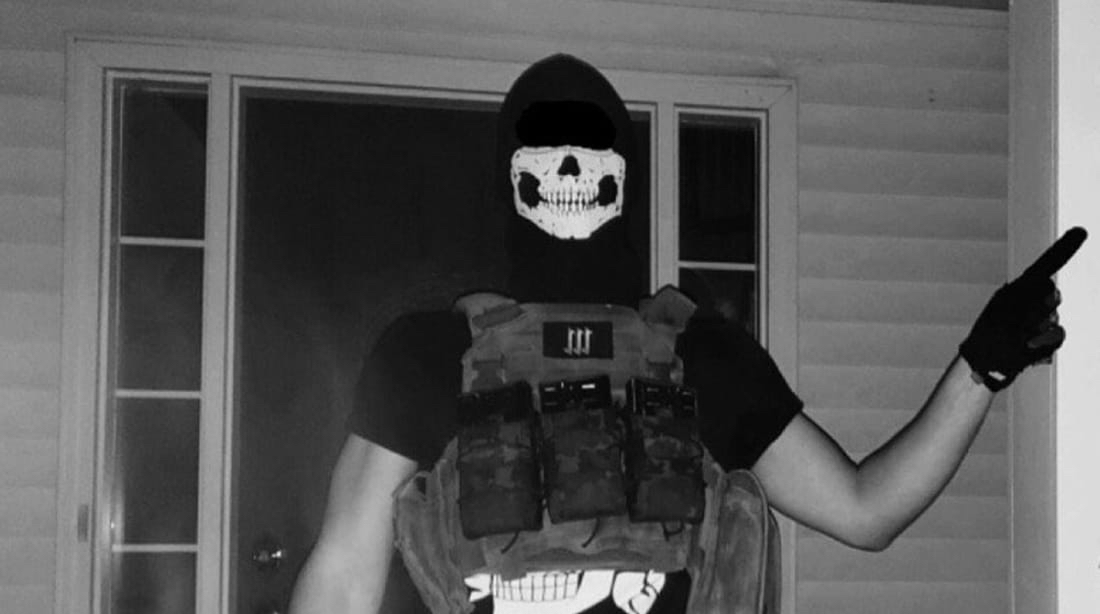 This photo appeared in the Telegram channel of the neo-Nazi group the Base. The man is pointing to the address of a Dexter house. (Photo courtesy of The Informant)

That's what happened to Rich and Dawn Shea of Dexter, northwest of Ann Arbor in Washtenaw County, last month. Their story is detailed in The Informant, a free newsletter covering the far right that launched this week.

The Sheas have nothing to do with either the far right or those who seek to expose them. But they do have a house that was once owned by a man named Daniel Harper. Another Daniel Harper from Michigan is host of a podcast called "I Don't Speak German," which covers the far right in critical detail.

Though the podcasting Harper wasn't the one who sold the Sheas their house, neo-Nazis seem to think it is. Hence after-dark visit, which was over by the time law enforcement arrived.

A few weeks later, the Sheas were visited again -- this time by officers informing them that their address was being shared on white-supremacist message boards, with thinly veiled suggestions that the people living there should be harassed.

This is essentially the worst possibility of mistaken identity, a tale of two men with the same name, a botched attempt to silence one of them, and a window into the world of neo-Nazis who encourage each other to commit acts of violence to further their perverted ideology.

It also shows the remarkable danger of doxing, a favorite tool of white supremacists who try to intimidate and harass people by posting their private and personal information online, and how it can go horribly awry.

The Daniel Harper whom the neo-Nazis were targeting lives elsewhere in Michigan, but for obvious reasons, won't say where.

The Sheas wish he would do more to make it clear the bad guys have the wrong house, which has appeared in multiple social-media posts on various neo-Nazi networks; the message that it's the wrong place doesn't seem to be sinking in. Dawn Shea wrote to Harper:

“We understand that your podcast and research are intended to shed light on a dangerous and significant rising culture in our society. We appreciate your concern,” she wrote. “However your work is putting 2 completely uninvolved and innocent families at risk and in fear for our safety and our children’s lives.”

Shea asked Harper to make some kind of public statement to make it clear that the neo-Nazis were targeting the wrong house in Dexter.

When Harper received that email, he really didn’t know what to do. He had already considered doing exactly what Shea was asking of him. But it was an impossible decision. There was no telling how the neo-Nazis would react. And even though the Sheas believed it would help them for Harper to go public, what if they were wrong?

The Harper the Nazis are after also worries that they may not even care they have the wrong house, that "they might find it funny and continue targeting the place."

The piece in The Informant is the first in a two-part series. The second one is set to be released Wednesday.