No shame in WSU's 'Word Warriors' game, unlike a certain other Michigan university

One gimmick this time of year involves our vocabulary, as shown by word lists from two Michigan universities 560 miles apart on separate peninsulas.

The first came New Year's Eve from Lake Superior State in Sault Ste. Marie, as we reported last week with a post on its 45th annual "List of Words Banished from the Queen’s English for Misuse, Overuse and General Uselessness." The latest installment has 13 phrases and words in an exercise one Metro Detroit critic dismisses on social media as "the annual scolding ... that we're not using the English language precisely to their liking." 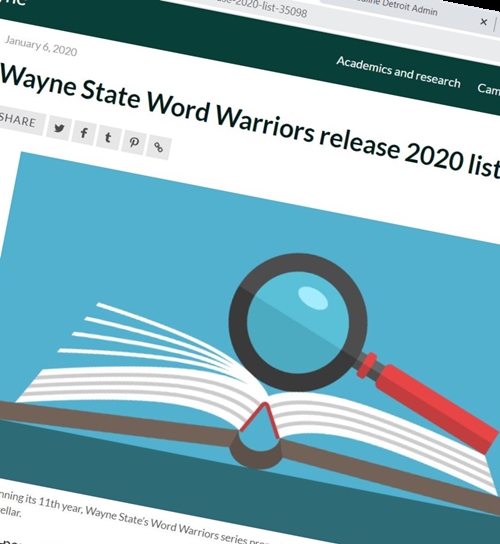 "These are beautiful words that have sadly fallen out of use over the years," an announcement Monday says, "but Word Warriors are confident their luculent definitions and examples will make logophiles rejoice — and, perhaps, cachinnate."

The promotional post is from Chris Williams, assistant director of editorial services in WSU’s Office of Marketing and Communications. He's a language maven who suggests a "word of the week" at a Word Warriors page.

"Each year, I'm curious to see how many old words — which are often new to me — will be recommended to us by our Word Warriors around the globe," he says. "Once again, they did not disappoint.

"The English language is so versatile and unique, and we've ended up with a list of 10 great words ... especially worthy of retrieval from the linguistic cellar. ... Too often we limit ourselves to words that are momentarily popular or broadly applicable, and so rob ourselves of English's inherent beauty and agility."

Check out the 2020 list for amusement, vocabulary-expanding and showing off.