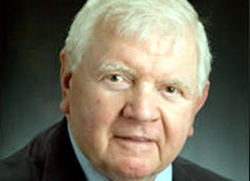 George J. Perles, former Michigan State University football player, coach, athletic director and Board of Trustees member, who was seldom shy about speaking his mind, died late Tuesday night, the Detroit Free Press and other media report. He was 85.

Perles, who died in East Lansing with his family present, was battling Parkinson's disease since 2017.

A Detroit native who played football and baseball at Detroit Western High, Perles became MSU's football coach in 1982 and in 1990 took on the additional role of athletic director. The school later forced him to pick one of the jobs and in 1992 he once again was just the coach. In 1994, MSU president M. Peter McPherson fired the contoversial Perles.

"There are a lot of people who take offense at my dad's personality," Perles’ son, John, told the Free Press in 1982, before MSU hired his father. “He's not exactly a soft-spoken guy. There are always a few people overwhelmed by his aggressiveness.”

Chris Solari of the Freep writes:

In 2006, Perles ran and won a seat on the MSU Board of Trustees as a Democrat, and was re-elected in 2014. He served from 2007 until November 2018, when he resigned and cited health concerns following a year which included fallout from the Larry Nassar conviction, the resignation of president Lou Anna K. Simon and athletic director Mark Hollis, and scrutiny into sexual assault allegations surrounding the school’s football and basketball programs.