Macomb County Executive Mark Hackel is discovering the price a politician has to pay to do what was once considered such a vital piece of American life that it was enshrined on the Statue of Liberty. 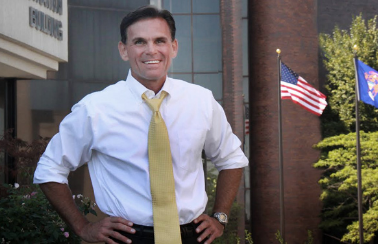 When he sent a letter to the federal government, expressing Macomb's willingness to keep receiving legal refugees seeking resettlement in the U.S., he found out how many of his constitutents don't want none of them huddled masses yearning to breathe free anywhere near them.

The letter is a new requirement, imposed via executive order by President Trump last year. In addition to cutting the number of refugees the U.S. will to accept to 18,000, the order requires county-level local officials to affirmatively express a willingness to resettle them in their jurisdictions.

(Hackel) never expected the social media furor that erupted next as people accused him of supporting bringing "illegal immigrants" into Macomb County. Hackel blamed unnamed political interests who were attempting to alarm residents into believing the county wants to become a haven for illegal immigrants.

On Saturday, Hackel took to his own Facebook page to respond, saying the letter  “had absolutely nothing to do with illegal immigration.”

“That is an out right lie!” he posted, adding “Macomb County has always welcomed LEGAL immigrants and I know of no community in the county that denies them access.”

Such is the power of social media, the No. 1 purveyor of so-called fake news in the country, and trusted by millions of Americans who think the mainstream media are lying to them.

Stop by the story to sip the nectar excreted by your fellow Americans:

"Let's see how compassionate you are when 'refugee' MS-13 gang members start shooting up your neighborhood or when some 'refugee' dude on the government dole with 4 wives & 20 kids moves in next door to you! This is crap!" another posted.