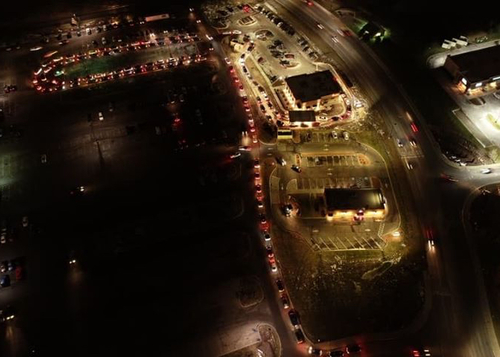 If you're looking for new dystopian content now that things seem to have settled down with Iran, look no further than the scene outside Metro Detroit's first standalone Chick-fil-A in Allen Park.

Video taken from Channel 7's chopper at lunchtime Thursday captured dozens of cars crawling through a drive-thru line so long it wrapped around an adjacent parking lot and required the hiring of people to direct traffic. A line of humans willing to brave the elements for the fast food chain's $3.75 sandwiches spilled out of the main entrance.

This was the first day of operations at the new location at Fairlane Green Shopping Center, alongside the Southfield Freeway between West Outer Drive and Oakwood Boulevard.

The scene was even bleaker earlier in the day, when people who'd reportedly camped overnight in the freezing cold lined up for the prospect of "free chicken for a year" — an offer to promote the opening.

Christian-run Chick-fil-A has been at the center of a culture war in recent years for funding socially conservative charities. A couple months ago, it waved the white flag and promised to stop.