Macomb County is catching up to a criminal prosecution best practice in other areas. It's hiring an administrator to build a public defender office, The Detroit News reports.

The job posting, which drew 51 applicants before closing last week, marks a turning point in the way criminal defendants too poor to afford an attorney are represented in Michigan's third-largest county.

Interviews begin in February, and the county expects to fill the position in March. 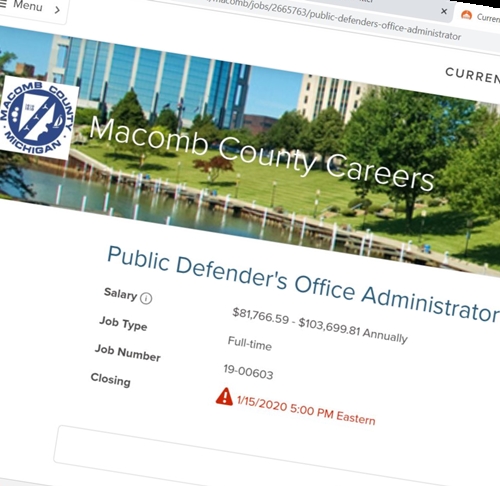 "You've got to protect people's rights, no matter who they are," Hackel said. "Even if they are a bad guy, we still have to protect their rights along the process, to ensure that we're not putting the wrong person in jail."

Currently, public defenders are assigned to indigent defendants in Macomb County through a case management committee at the 16th Circuit Court.

Those staff members pick from among roughly 500 attorneys willing to accept fixed fees for case preparation, hearings and trials.

Now Macomb will professionalize the system with a full-time administrator earning up to $103,700 and at least one public defender.