Detroit Vs. Everybody closes four locations, lays off 35 workers 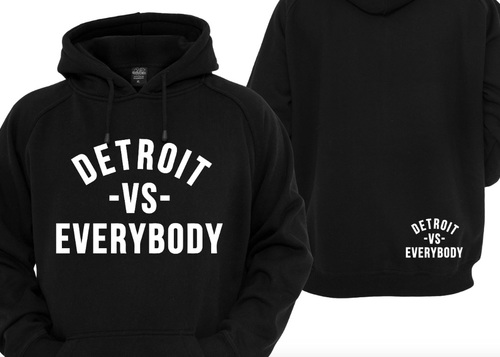 There was a time before Dan Gilbert moved in and after all the car companies moved out that some would joke Detroit's top industry was T-shirts reflecting hometown pride. Some wondered how sustainable that industry was: Wouldn't the city and its fans reach a point at which they owned all the Detroit shirts they needed?

We still don't have an answer to that existential question, but we do know changes are afoot at one of Detroit's top hometown tee purveyors, Detroit Vs. Everybody. Crain's reports the company is closing four of six Metro Detroit locations and consolidating operations into a warehouse where it'll ramp up apparel production and add screen-printing services.

Stores to close include those at Lakeside Mall in Sterling Heights, The Mall at Partridge Creek in Clinton Township, Fairlane Town Center in Detroit and on Southfield Road in Southfield. The company's founder would not discuss the financial performance of the stores with Crain's.

Detroit Vs. Everybody shops at Eastern Market and Twelve Oaks Mall will remain open.