Jorge Zeballos, a senior administrator at Kellogg Community College, at first was so proud of protesting with a profane sign that he showed it on Facebook. Now he's chastened, not cheering. 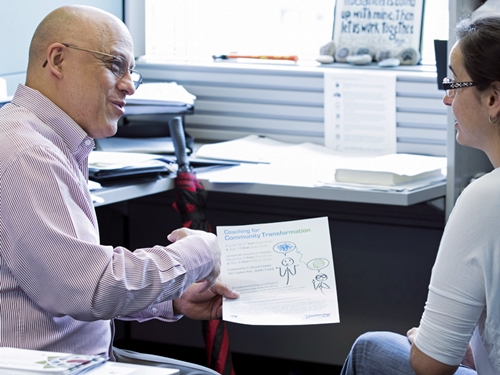 Jorge Zeballos: "I deeply regret posting the picture on my Facebook page and the controversy it has generated."
(Photo: W.K. Kellogg Foundation)

Zeballos, originally from Lima, Peru, is chief equity and inclusion officer at the two-year college in Battle Creek. He earlier was the first executive director of its Center for Diversity and Innovation, established in 2014 by a foundation to promote racial equity in the community.

The 57-year-old is an active, visible local figure whose crude public display quickly became a flashpoint. On New Year's Day, two weeks after Trump's rally, he yanked the social media photo and explained why:

"While I stand by my first amendment right to express myself, I understand that my public and private actions have repercussions on the institution I work for, Kellogg Community College. Because of this, I deeply regret posting the picture on my Facebook page and the controversy it has generated.

"Anyone that has interacted with me, both professionally and personally, knows that I strive to have respectful dialogue on some of the most challenging issues with anyone that holds a different opinion than mine. This incident doesn’t change who I am and what I stand for, creating a more equitable and inclusive society." 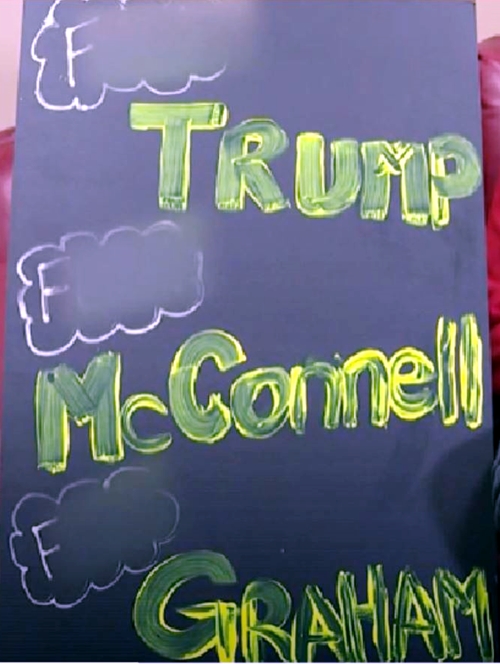 A CBS affiliate in Battle Creek, blurs the F-bombs in its coverage. (Screengrab: WMMT)

College trustees on Jan. 15 heard from critics and backers of Zeballos. "But they took no action," Dawson Bell posts at Michigan Capitol Confidential, a point-of-view news site run by the Mackinac Center for Public Policy, a free-market think tank in Midland.

Zeballos’ 2019-20 salary as the college’s leading promoter of inclusivity is $98,033, KCC revealed in response to a Freedom of Information request from the Mackinac Center for Public Policy.

Zeballos was hired last year as the head of a newly created Office of Equity and Inclusion. The college had said the hire demonstrated its "commitment to creating an inclusive environment that fosters respect, supports cultural understanding, demonstrates ethical behavior and champions social justice."

Before the flare-up hit CapCon and Breitbart News, it was the focus of commentary by David ("Renk") Renkiewicz of WBCK-FM, a Battle Creek news and talk station. An excerpt:

Is this the type of behavior you would expect from someone working in 'higher education' and being paid by our tax dollars?

Will Kellogg Community College stand for such behavior or take action by removing him from ever being around students let alone professors who teach students? We will see. 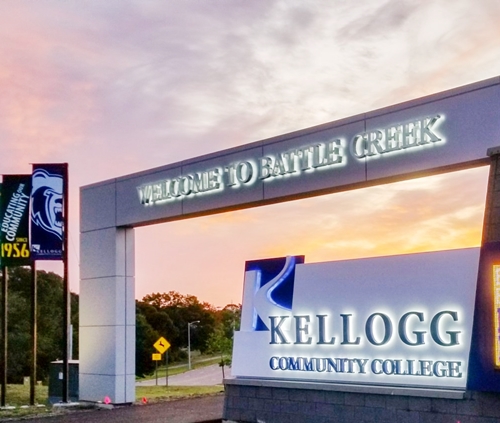 In a Jan. 7 statement about the sign-holding, the college board said:

"The KCC employee in question was expressing his personal opinion on his own time. ...

"However, this matter is a teachable moment and healthy reminder for all KCC employees that our actions as individuals can have an impact on the institution. Whether that impact affects an individual's employment status at KCC ... is a determination made via KCC's ongoing performance management process."

Before moving to Battle Creek six years ago, Zeballos was Latino community coordinator and director for diversity training and development at Guilford College, a small Quaker campus in Greensboro, N.C.

Below is a statement from resident Joni Jones that appeared in coverage at Campus Reform, a conservative site. It was obtained by political science student Jonathan McCormick Jr. of Andrews College in Berrien Springs, Mich.

'It will have the effect of squelching
free speech on campus,' critic says 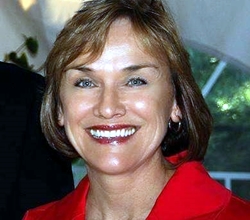 Joni Jones: "Students with conservative leanings are likely to be intimidated into silence." (Photo: Facebook)

I am a taxpaying citizen of Battle Creek. I was directed to Jorge Zeballos' publicly available FB page and this picture by a friend who knew that I have deep concerns as to what we see happening with some of these "equity," "diversity" and "inclusion" initiatives at our public institutions of higher education. I was shocked to find this picture and even more disturbed that some of KCC's Board members (who are FB "friends" with Mr. Zeballos) had not pressured him to remove the post.

Mr. Zeballos has every right to protest and to express himself. However, he is bound by a professional code of conduct as an employee of KCC, knowing that his conduct and speech will also be associated with the college.

He has violated the very goals that are listed on the "Equity & Inclusion" page of KCC's website. His behavior, in no way, fosters or promotes civility and does not advance dialogue. To the contrary, it will have the effect of squelching free speech on campus, as those students with conservative leanings are likely to be intimidated into silence. That is NOT what colleges and universities are supposed to be about and it has to stop.

[In a Facebook follow-up, Joni Jones posts: "This is NOT about the 1st Amendment or even about President Trump. It IS about what taxpayers can expect of the highly paid public education administrators -- that WE fund -- particularly those serving in roles such as 'chief equity and inclusion officers' at 'higher-ed' institutions."]