Morris Berger's job title seems fitting in a double-meaning way that's not a point of pride.

He just became offensive coordinator for the football team at Grand Valley State University in Allendale, Mich., and begins his second week on suspension for an offensive comment in a campus paper.

The new hire fumbled the second-to-last question from the Grand Valley Lanthorn's sports editor, an easy toss asking who he'd pick "if you could have dinner with three historical figures, living or dead?" It's an interview cliche, a question so safe the only risk is self-sabotage. 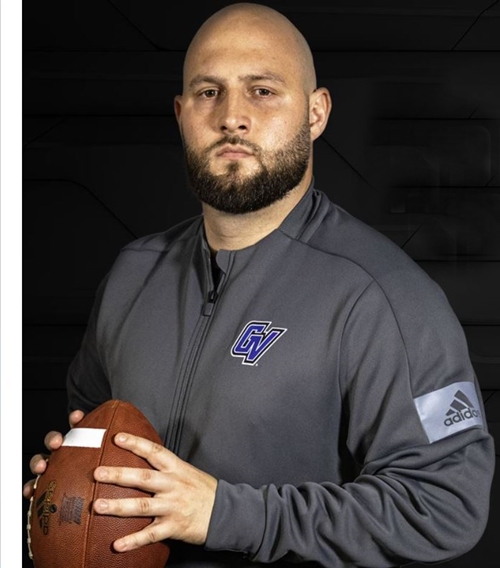 Morris Berger: "This is probably not going to get a good review, but I'm going to say Adolph Hitler." (Photo: GVSU Athletic Department)

And that's what happened in West Michigan. Berger's choice No. 1 knocks him off the job, at least for now:

"This is probably not going to get a good review, but I’m going to say Adolf Hitler. It was obviously very sad and he had bad motives, but the way he was able to lead was second-to-none.

"How he rallied a group and a following, I want to know how he did that. Bad intentions of course, but you can't deny he [was] a great leader."

It's like a slow-motion career crash as the new man on campus senses a caution sign in his mind before going ahead anyhow.

Berger's other imaginary tablemates are John F. Kennedy and Christopher Columbus, whose name he prefaces with "this might sound crazy, but . . ." Yes, he zips past another yellow signal.

On Monday, which happened to be International Holocaust Remembrance Day, the university said in an unsigned statement: "The comments made by offensive coordinator Morris Berger, as reported in The Lanthorn student newspaper, do not reflect the values of Grand Valley State University.  Berger has been suspended and the university is conducting a thorough investigation."

The interview, posted last Thursday, has a second eyebrow-raiser as sports editor Kellen Voss, a 21-year-old senior from Zeeland, says right after the Hitler reply: "The way he was able to get people to rally around him was crazy."

Berger is a Missouri native who graduated eight years ago from Drury University in Springfield, Mo., with a history degree and added a master's in educational psychology from the University of Missouri in 2016. He was recruited by GVSU head coach Matt Mitchell after working for two years on the offensive coaching staff at Oklahoma State and briefly as tight ends coach at Texas State.