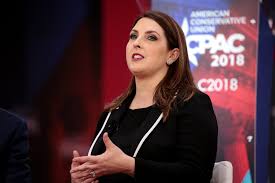 Ronna Romney McDaniel: "They're trying to demean you and your beliefs."  (Photo: Facebook)

Michigan's own Ronna Romney McDaniel, chair of the Republican National Committee, sent a mass email Tuesday to that uses biting, Trump-like language to stir up the base and raise money for the president.

I’m absolutely disgusted. The other night on CNN, Don Lemon and his liberal friends laid their cards on the table and made it obvious what ELITES think of everyday Americans who support President Trump.

These radical hacks painted conservative voters as illiterate hillbillies on national television because they DESPISE President Trump and they DESPISE you, Friend. (See video below)

This is what D.C. Democrats like Joe Biden, Bernie Sanders, Michael Bloomberg, and Elizabeth Warren truly think of you.

I can’t think of a better way to show them just how WRONG they are about us than by absolutely CRUSHING our January End-of-Month goal and their socialist candidates.

President Trump set a HUGE goal of raising another $3,000,000 by January 31st, and he’s counting on EVERY PATRIOT stepping up. This goal is so important that the President has activated a TRIPLE-MATCH on ALL CONTRIBUTIONS...

First, we were “deplorable,” and now we’re a bunch of idiots who don’t know how to use a map according to the Left. They’re trying to demean you and your beliefs in an attempt to keep you away from the polls in November - it’s pathetic.

The tone of the letter is very similar to the frequent mass emails sent to Trump supporters by the president himself and different members of his family, which raises a question as to whether the Trump camp acutally wrote the email on behalf of McDaniel and simply put her name on it.

On Wednesday, we asked the RNC in Washington whether McDaniel actually wrote the letter.

"Yes, I think it's fair to say it's in the chairman's voice,"  an RNC official said.