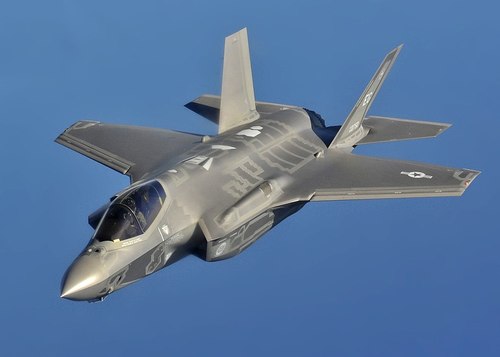 It's an election year and Donald Trump is saying things that please Macomb County.

During a stop at an autoparts manufacturing facility in Warren Thursday, Trump said he was giving "strong consideration" to deploying F-35 fighter jets to Selfridge Air National Guard Base in Harrison Township. He spoke of "very fast planes" that people maybe won't see, because "actually, they will be stealth."

Politicians from both parties have long lobbied to bring the fancy, expensive fighters to Michigan. They reportedly can carry 18,000 pounds of ammunition.

From The Macomb Daily:

Macomb's congressional delegation and other county leaders have long been working air base personnel to sway the Air Force to locate the single-engine jets at Selfridge in 2017. Instead, the aircraft was awarded to bases in Florida and Wisconsin. But in the case of Wisconsin, the idea ran into resident opposition over noise and other issues.

In November, a letter signed by most of the Michigan Congressional delegation was sent to Barbara Barrett, Secretary of the Air Force, asking Barrett to reconsider SANG as one of two preferred alternative locations. Those who signed the letter include U.S. Sens. Gary Peters and Debbie Stabenow and Macomb County-area Congressmen Paul Mitchell and Andy Levin.