Detroit Mayor Mike Duggan may have competition from a vocal critic if he seeks a third term in 2021.

State Rep. Sherry Gay-Dagnogo, a former Detroit science teacher who represents the 8th District on the west side, announced Thursday -- her 53rd birthday -- that she's forming a committee to explore a possible run for mayor after term limits force her from the House. Fund-raising started at the announcement, which was a combination birthday party and political event with a $100 "general donation." 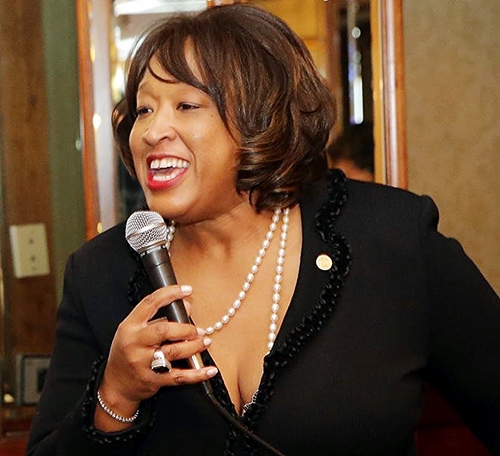 Sherry Gay-Dagnogo: "Are you ready for the next move in the City of Detroit?" (Photo: Facebook/Walt Miller)

"I'm ready. I believe that our city needs a matriarch, needs a woman," she says in a Facebook video. "I may not be the only woman, but I'm one of the women that can serve this city as the next executive Mayor of the City of Detroit. ...

"These next few months, we will be exploring what it will take. ... Are you ready for the next move in the City of Detroit?"

Gay-Dagnogo stresses the need to "close the gap" between prospering and languishing parts of the city, The Detroit News reports.

Gay-Dagnogo has been an advocate for quality education and issues affecting seniors, affordable housing and automobile insurance and criminal justice reform, co-sponsoring a bill last fall aimed at clearing the criminal records of more of Michigan's ex-offenders.

She also has been critical of Detroit's demolition program, urging council members in October to weigh whether more taxpayer money should be allocated for demolition after a home her nonprofit was renovating was mysteriously razed.

This week, she spoke out in favor of a presidential break for imprisoned former Mayor Kwame Kilpatrick, who has served seven years of a 28-year federal corruption term.

She emailed the Free Press a letter that she's circulating with the $100-a-person party announcement. It says in part:

"It is time that we seize the possibilities of collectively advancing commutation of former Mayor Kwame Kilpatrick's sentence. As such, I hope that you will consider joining me by writing a letter to Jared Kushner, Senior White House Advisor to the President, to express that after 7 years of Kilpatrick's 28 year sentence, as a first time offender, his sentence should be commuted to time served. This is not a race issue; this is a Justice issue!"