Video: Detroit Gunman Can’t Figure Out How to Open Door after Botched Robbery 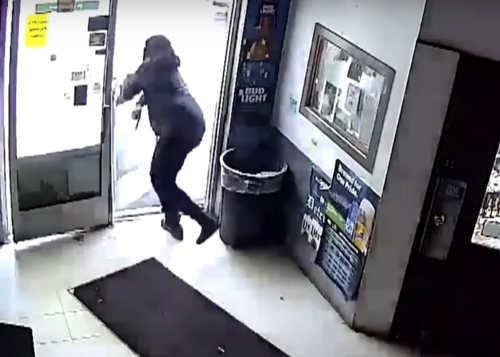 He saw fit to shoot the door repeatedly and kick it off its hinges before fleeing.

We’ve all been there -- nervously glancing around and hoping no one noticed after repeatedly pushing a door that says “pull.”

A Detroit gunman found himself in a similar predicament while attempting to leave a party store he had just tried to rob. In this case, he saw fit to shoot the door repeatedly and kick it off its hinges before fleeing, as shown in security footage obtained by WDIV.

It all began on Jan. 10  when the manager entered the store in the 8100 block of East Forest Ave. just after 10 a.m., according to police. Seconds later, the robber followed and pointed a gun. The manager rushed into a cash register enclosure and locked the door.

The gunman aimed his weapon at anemployee and told him to leave. Then he shot at the cash register room door, but couldn't get in. That's when he tried to rush out and had door trouble.

Police are searching for the gunman and a waiting companion who drove off in a Silver Chevy Impala with a dented passenger side door.