Rep. Rashida Tlaib was poart of a traffic-blocking labor protest Friday afternoon at Detroit Metro Airport. The Democratic congresswoman from Detroit was moved by police, but not arrested, after sitting across all lanes at the McNamara Terminal departure level with eight Delta catering workers.

She "was not processed as an arrest with the other protesting workers, but did participate in solidarity in the civil disobedience, including joining the protesters in the van as officers took them for processing," tweets Diana Hussein, a communications representative for Local 24 of Unite Here, a service workers' union. 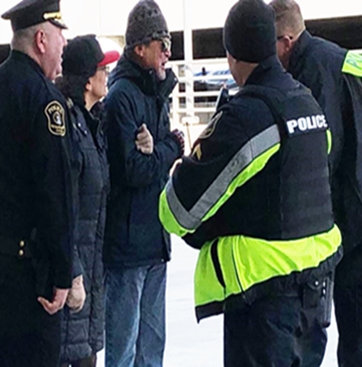 The Detroit congresswoman links her arm with a catering worker's as police end the sit-in.

That labor organization staged airport protests Friday in 16 cities, "calling on American, Delta and United airlines to act to end poverty and unaffordable health care in the industry," a statement says. Arrests took place at six sites, according to Unite Here.

"We've helped Delta earn its profits too,” Lonmea Whitfield of Detroit says in the union release. "Through participating in this day of action, I want to show Delta that catering workers like me also deserve to share in its success." The 57-year-old has worked for Sky Chefs at Detroit Metropolitan Airport since 2015.

Near Dallas, more than a dozen airline catering workers and supporters sat outside American Airlines headquarters Thursday and Friday in a "hunger fast."

We won't stop until we get #fairwages & #healthcare. These courageous people got arrested tonight at DTW b/c they believe workers deserve human dignity. Shame on you @Delta for leaving workers behind and letting them live in poverty. @unitehere https://t.co/njM6UQbjPu pic.twitter.com/msDm2XlowY

At her feed, Hussein of the Detroit local says: "This crisis of poverty has been building for over a decade. Now, catering workers are calling on Delta to take responsibility and show leadership by rewarding service and loyalty. Delta must ensure that #1Job is enough to live with dignity for all airline workers."

Roses are red.
Violets are blue.
#1job should be enough
For United Airlines catering workers, too!