Dan Gilbert shares a potentially life-saving tip as he recalls a scary night.

"Get your ass to the hospital" if you have double vision or other stroke symptoms, the 58-year-old survivor of a close call tells Crain's Detroit Business in this week's cover story. 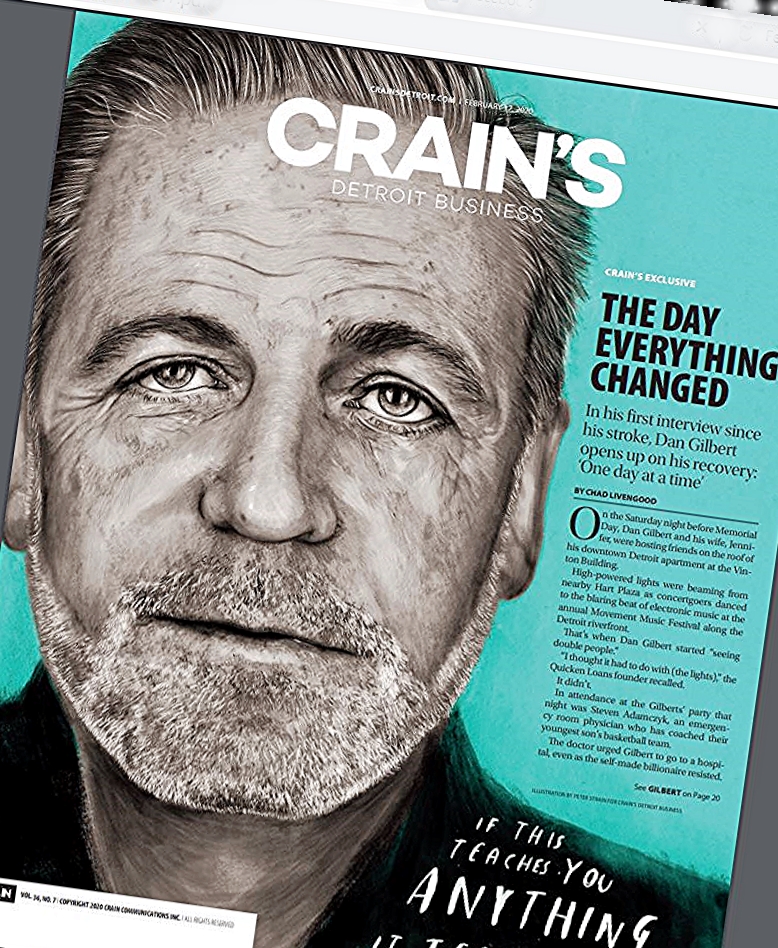 When Gilbert began "seeing double people" during a downtown rooftop party last Memorial Day weekend, he thought it was because of flashing strobes from the Movement electronic music festival at nearby Hart Plaza.

In attendance at the Gilberts' party that night was Steven Adamczyk, an emergency room physician who coaches their youngest son's basketball team.

The doctor urged Gilbert to go to a hospital, even as the self-made billionaire resisted. . . . Adamczyk accompanied Gilbert to [Beaumont] hospital.

"So they basically saved my life — this guy and my wife [Jennifer] — because if I didn't go, it would have been a problem," Gilbert said in an exclusive interview with Crain's. ... "If that artery was blocked more minutes than it was, it would have been much worse."

The office interview four days ago with senior editor Chad Livengood and managing editor Michael Lee is Gilbert's first media sit-down since that ischemic stroke in the right side of his brain nine months ago. His left arm and leg were paralyzed temporarily.

Next Friday at a luncheon in MGM Grand Detroit casino, Gilbert plans to make his first public speech since that health scare, Livengood writes.

He'll be honored with the first Newsmaker Hall of Fame award for his frequent appearances on the list of top Newsmakers in Crain's 35-year history.

The wide-ranging interview, headlined "The day everything changed," has reflections on feeling "trapped in your own body" and on Gilbert's respect for neurological rehabilitation nurses after spending eight weeks last summer at Shirley Ryan AbilityLab in Chicago.

"The hardest-working people in the world are these nurses and nurse assistants," Gilbert said. "I have no idea what they get paid, but I'm certain they're underpaid — because you can't pay them enough.

"I mean, none of us would do for 20 minutes what they do nine hours a day every day of the week," he added.

He also lists two other signs of a possible stroke, besides double vision: face drooping and arm weakness or numbness.

► Podcast: An 18-minute audio version of the interview is here.

► Transcript: Crain's subscribers can see an edited version of the interview last Wednesday at Gilbert's Quicken Loans office in One Campus Martius in downtown Detroit.