Owen Bieber, Who Led UAW a Dozen Years, Dies at 90 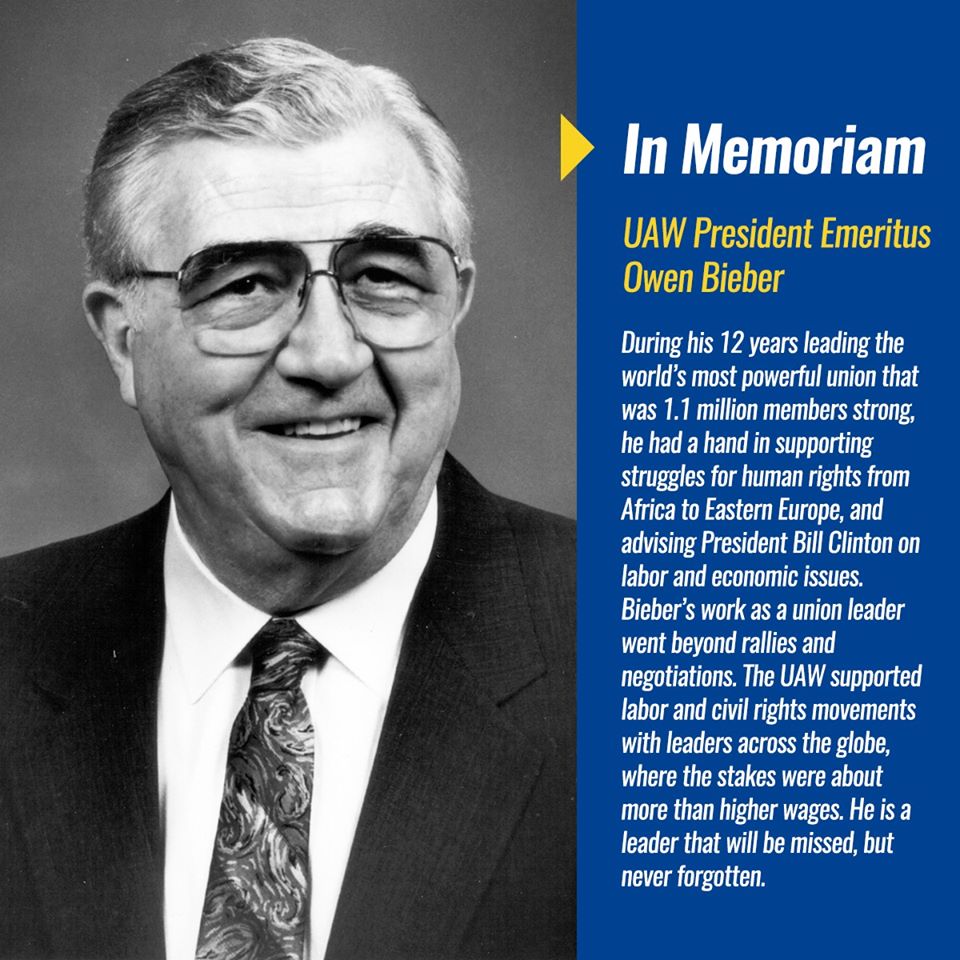 Owen F. Bieber, who was the president of the United Auto Workers during a challenging time for unions, from 1983-95, died Monday. He was 90.

“Owen Bieber’s death is a loss for our union and all working people. He was a man of incredible leadership," said UAW President Rory Gamble in a statement on social media.

"He was not afraid of tough battles or taking a stand on controversial issues. He was not only a devoted trade unionist but a social activist whose impact was felt around the world. Whether it was his support to end apartheid in South Africa or in Poland, Owen stood on the right side of history for the nation and the world.”

While Bieber dealt with declining membership and tougher contracts due to economic challenges, the union enjoyed a reputation as being progressive and clean, contrary to recent times where the organization has dealt with FBI investigations and indictments at high levels.

"My father was born into hard work and trade unionism, and through his mentorship he passed those traits to the next generation. He led the UAW at a challenging time for auto workers and all working people, and he fought for social change in this country and around the world. His loss is felt deeply by his family and all of those whose lives he touched. Owen Bieber left behind a world that is better off because of his activism and dedication to service to others."

Bieber was born in December 1929 in Dorr Township in  Allegan County, Michigan.

According to The New York Times:

Mr. Bieber presided over many strikes that won modest gains, including a six-day walkout in 1984 by 91,000 workers at 33 G.M. plants in 12 states, and a 12-day strike a year later by 80,000 Chrysler employees in the United States and Canada. His longest and most humiliating strike lasted 17 months in 1994-95 against Caterpillar, the Illinois-based heavy equipment maker, and ended in capitulation, with 8,700 unionized employees returning to work without gaining anything.

Mr. Bieber said his worst disappointment was not being able to organize thousands of new workers for his dwindling membership rolls. But he achieved some gains. He negotiated a 1983 pact to extend union representation to employees of a G.M.-Toyota manufacturing plant in Fremont, Calif. He also added 22,000 State of Michigan employees in 1985.