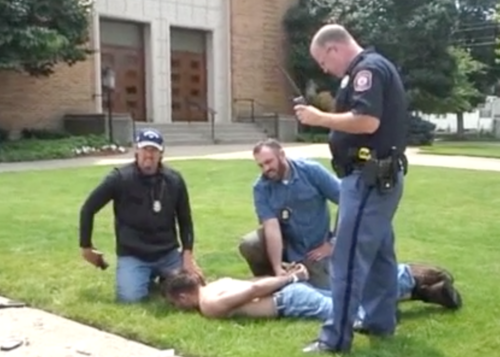 In 2014, King was beaten and choked by members of a federal/state task force.

A Grand Rapids man wants to close a loophole that he says lets state-federal law enforcement task forces violate constitutional rights. The Institute for Justice, a Liberetarian public interest law firm in Arlington, Va., is representing James King in a federal lawsuit against multiple officers who harmed him.

King and his lawyers hope to overturn technicalities, which they say make federal/state joint law enforcement officers and agents immune to legal repercussions. The government has now taken the case to the Supreme Court.

In 2014, King was beaten and choked by members of the FBI task force -- an FBI agent and a Grand Rapids police detective -- that misidentied him as a suspect of a crime, according to an Institute for Justice press release. He was a student at Grand Valley State University, outside of Grand Rapids, during that time. A recent Washington Post op-ed points to a series of errors in the search for the suspect.

The task force had a vague description of a white male with glasses between 5 feet, 10 inches and 6 feet, 3 inches, features that would match thousands of people in the Grand Rapid area. The officers relied on a 7-year-old driver’s license photo of the suspect. The suspect was 26 and had light hair; King was 21 and had dark hair.

The beating was recorded by several witnesses and prompted calls to police. In court, King pleaded not guilty to the charges. In trial, the jury unanimously acquitted him. King details his story in a 16-minute video from the law firm near Washington, D.C.