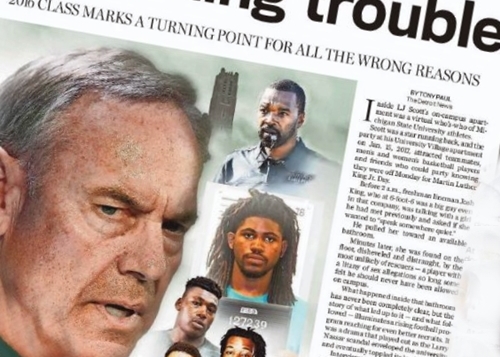 The latest twist in the case of former Spartans recruiting director Curtis Blackwell centers on an alleged visit to a recruit's home, which is not permitted under NCAA rules. In a sworn affadavit, the recruit's mother says Dantonio and Blackwell came to the family's home for breakfast in 2015. Lawyers submitted a photo of the group allegedly taken during that visit.

ESPN reports Dantonio, who retired abruptly this month, previously denied under oath that Blackwell ever attended home visits with recruits while at Michigan State.

Blackwell's attorney, Thomas Warnicke, filed Tuesday's motion as part of an attempt to depose Dantonio for a second time. Warnicke has argued in court documents that his first deposition session with Dantonio was cut short of the court-allowed amount of time.

Blackwell is suing Dantonio and several other former Michigan State employees, including former athletic director Mark Hollis and former university president Lou Anna Simon, in federal court. Blackwell claims he lost his job in 2017 because he was made a scapegoat while the football program dealt with the fallout from a pair of sexual misconduct incidents during the same time that the university was under heavy public scrutiny for its handling of the Larry Nassar scandal. A review of the football-related incidents conducted by a law firm hired by Michigan State said Blackwell was the only Michigan State employee who didn't follow protocol in handling those situations.

Two weeks ago, Blackwell said in court documents that Dantonio helped arrange a job for the parent of one high-profile recruit and took Blackwell along on an in-home visit to another player's house. Dantonio retired the following day,

Dantonio has said his decision had nothing to do with Blackwell's allegations.