Is Detroit Visitors Bureau Too Friendly to Farrakhan? Critics Think So

There's a line between being a hospitable host and courting controversy when welcoming a firebrand guest widely condemned as anti-Semitic.

That line may not seem to exist for city tourism promoters, whose mission is to fill hotel rooms, restaurant seats, the convention center and generate other economic activity. But by posting the graphic above with a tweet that says "We're excited to have you in our city!" the Detroit Metro Convention and Visitors Bureau provokes predictable pushback.

"This is beyond problematic," says a response by Drew VanDrese, 25, a business development director in Ann Arbor.

Jessica Stage, a 34-year-old education consultant from Berkley, tweets: "No. No we are not excited to have you and your anti-Semitism. Embarrassing." 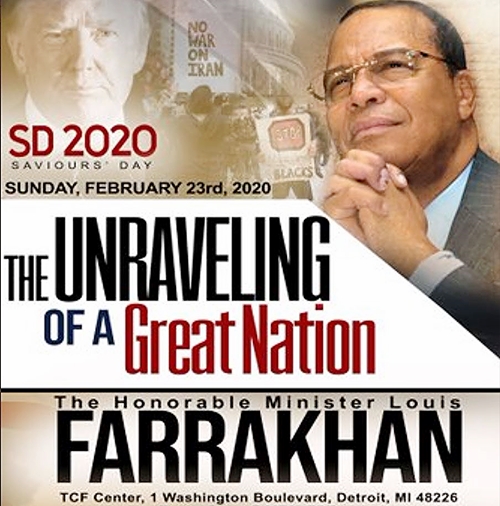 The welcome is for a Chicago-based group led by Minister Louis Farrakhan, who speaks Sunday afternoon at TCF Center to close a three-day annual convention of the Nation of Islam, founded in Detroit 90 years ago. It's the fifth national gathering here since 2007, Free Press coverage says.

Niraj Warikoo, who reports on religion and immigration for the paper, puts the group in balanced context:

"Outside of Detroit and black communities, Farrakhan and the Chicago-based group he has led for more than 40 years have a controversial reputation. The Anti-Defamation League and Southern Poverty Law Center accuse the Nation of Islam of promoting hatred and anti-Semitism. The Jewish Community Council of metro Detroit expressed concern about Farrakhan's latest visit to Michigan.

Rabbi Asher Lopatin, the executive director of the Jewish Community Relations Council of metro Detroit-American Jewish Committee, said in a statement: "Minister Farrakhan’s hateful speech towards Jews and others is not just immoral, it is damaging to our country and our community. Sadly, we are in a time when Jews, African Americans, Muslims and other minorities are threatened by the scourge of hate, and where partisanship and division present a real threat to America.

"We cannot brush aside Minister Farrakhan’s words over the decades denigrating the Jewish people and spewing venom against them. ..."

Farrakhan and the Nation are seen differently in pockets of Detroit, where the group has been active for decades promoting self-sufficiency within the black community. In a city that is about 80% black, many in Detroit are receptive, or at least curious, about the Nation's message of black nationalism, self-help and pride. The Nation of Islam has renewed their push for blacks to increase the purchase of land, start businesses, and grow without the help of others.

These are among other replies under the tourism bureau's tweet: