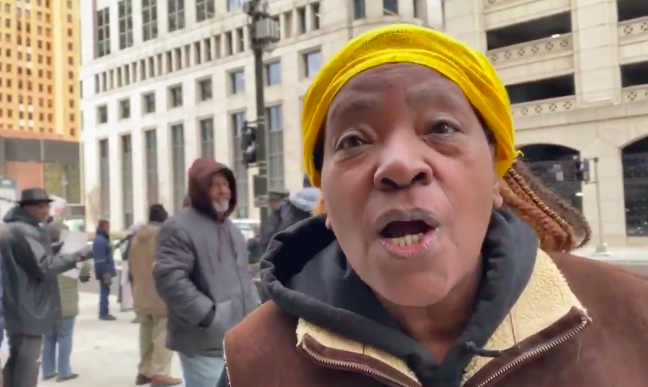 The Detroit News reports about 70 protesters descended on the Coleman A. Young Municipal Center Friday afternoon, loudly demonstrating for relief after they claim overassessment of their property led to them being overcharged for property taxes. In some cases, owners lost their homes to tax foreclosure.

Police dragged Agnes Hitchcock, 74, of Detroit, out of the Finance Department-Income office.

Friday's protest started outside on Larned Street before around 70 people marched inside with signs chanting. Their goal was to make it inside to swarm the tax and Mayor Mike Duggan's office.

Many were delayed entry into the building by a slow screening process, clustering in the lobby backing up city hall workers.

... Duggan has acknowledged past overassessment but said he cleaned up the practice and lowered values after he took office in 2014. The mayor said he can't repay homeowners because current law doesn't allow it and the city can't afford it.

The Detroit News last month published the results of an investigation that found some homeowners were overtaxed by $600 million between 2010-'16, because the city failed to accurately assess property in the tailspin after the Great Recession.

The crowd chanted "Cut the damn check" during the brief protest.