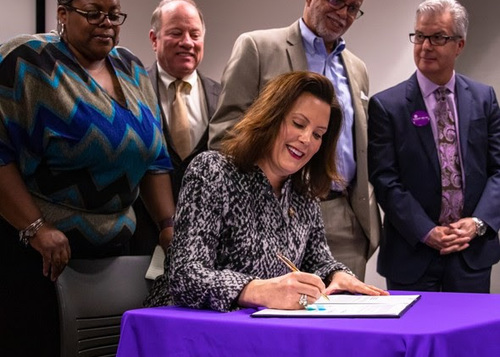 Whitmer signs Pay As You Stay. (Photo: City of Detroit)

Gov. Gretchen Whitmer on Monday signed into law the so-called “Pay As You Stay” bill, paving the way for tax-delinquent homeowners to enroll in a program that could reduce their debts and eliminate additional fees and interest.

Despite a significant reduction in tax foreclosures in recent years, thousands of Detroit homeowners sill struggle to pay their bills. Approximately 30,000 properties with more than two years of past-due bills are noticed for foreclosure each year. More than 11,000 homeowners are on payment plans for delinquent debts.

The Pay As You Stay program is available to Michigan residents with a poverty tax exemption. That's about 7,600 homeowners in Detroit now, though many more are believed to be eligible. Homeowners can qualify for Pay As You Stay through 2023.

Here's how it works, according to the governor’s office:

The program is a three-part plan. Once enrolled, all interest, penalties, and fees would be eliminated.  To reduce an undue burden on homeowners, the balance due would be limited to back taxes only or 10 percent of a home’s taxable value – whichever is less. The remaining balance would be paid back over three years at zero percent interest.

It was created following Detroit News inquiries on a separate, low-interest payment plan the paper reports in many cases drove participants into deeper debt. That plan — the Interest Reduction Stipulated Payment Agreement, or IRSPA — was created by state law 2015.

The News review conducted last September found that nearly 40 percent of early IRSPA enrollees — nearly 4,700 homes — were either foreclosed or off their plans and at risk of foreclosure this fall. Another 23 percent had more debt than they did when their payment plans began.

Housing advocates fear the new Pay As You Stay payment plan will amount to another half-measure that fails to adequately address the problem. Pay As You Stay fell short of a bolder, straight debt-elimination bill previously proposed by Byrd. That plan had the backing of housing advocates, but didn’t move forward because it lacked support from Duggan and Sabree, who said it wouldn't have been "fair" to homeowners who paid their bills.

A separate Detroit News investigation has since found that the city overtaxed Detroit residents by at least $600 million from 2010-16 and that 90 percent of homeowners with delinquent debts were overtaxed by an average $3,700 — more than the average debts owed.